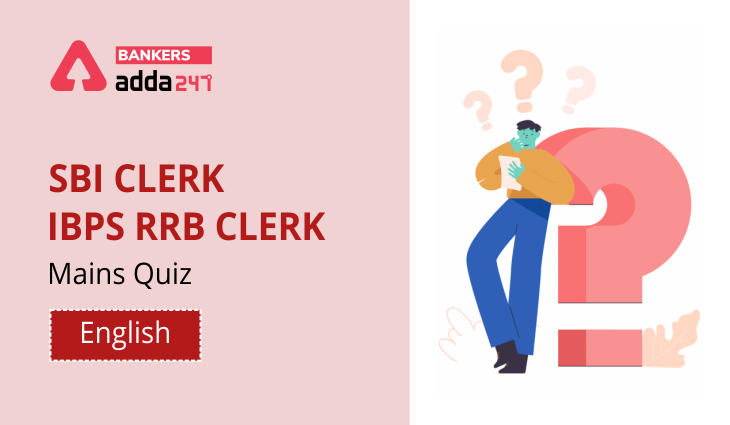 Directions (1-10): Rearrange the following five sentences (A), (B), (C), (D) and (E) in the proper sequence to form a meaningful paragraph and then answer the questions given below.

Q1.(A) that highlighted more than just the end of the Ba’ath party’s decades-long reign. Within a month, U.S. President George W. Bush had declared “mission accomplished” in Iraq.
(B) The war, which began on March 20, 2003, had no legitimate basis, being founded on misleading intelligence information, if not downright lies confusion
(C) a 39-foot statue of Saddam Hussein in Baghdad’s al-Fardous Square was brought down under the watch of American troops. It was an iconic moment
(D) Fifteen years ago, on April 9, a few weeks into the U.S.-led invasion of Iraq,
(E) But one and a half decades later, the country is still fighting the ghosts of the destructive war.
(a) DCAEB
(b) DBACE
(c) DBCAE
(d) DACBE
(e) DEACB

Q2. (A) Devise a viable Cauvery scheme soon, stop disruptive protests. The Centre cannot continue
(B) The court’s frustration was evident, as the Bench headed by the Chief Justice of India was surprised and disappointed that the Centre had not put a scheme in place or sought an early clarification.
(C) For the Centre, it was embarrassing to be asked to demonstrate its bona fides by submitting a draft scheme for the court’s consideration by May 3.
(D) to evade its legal obligation to create a mechanism to implement the Supreme Court’s final verdict in the Cauvery dispute.
(E) This was the broad message conveyed by the court on Monday when it admonished the government for failing to frame a scheme within the six-week time limit given earlier.
(a) ABCDE
(b) AEDBC
(c) AEBCD
(d) ADECB
(e) ACBDE

Q3.(A) an absence of ground truths has meant that areas that look green, such as tea estates and commercial plantations, have been counted as forests.
(B) Environmentalists stress that it is difficult to believe that India’s forest cover has become more dense in the last two years simply because this process takes much longer.
(C) For this, we need a more rigorous integration of the forest policy with other existing environmental legislation and policy. This, in turn, will help decentralise information on forests.
(D) The point is that there is a need to create mechanisms to calculate our actual forest cover and natural wealth, and this should form the basis for a forest policy.
(E) Crucially, the claim of new forests being created is questionable. In several consecutive forest reports,
(a) EABCD
(b) EBADC
(c) EDCAB
(d) ECBDA
(e) EABDC

Q4.(A) I am the first to say that governments shouldn’t over-regulate — they are the ones who want to ensure that people’s data arecaptured for them — but you can’t expect these companies to play god either.
(B) We’ve been dragged into this arena not by choice but by default. We’ve been raising this issue for a while,
(C) There has to be regulation.
(D) where four or five companies have complete monopoly of data and there is no regulation whatsoever,
(E) which is problematic.
(a) BDAEC
(b) BDEAC
(c) BEADC
(d) BDCAE
(e) BCADE

Q5. (A) Once I visited a friend in Delhi. When the morning papers came, he would take the puzzle page and start attacking the sudoku with whichever pen or pencil at hand,
(B) his attitude conveying a victor’s contempt at the loser programme that had set the puzzle.
(C) Within minutes he would be done, the extra diabolical puzzle killed in an ugly splatter of pen marks, scratching out, and overwriting.
(D) With a sniff only Bengali men of a certain age can produce, he would drop the page and march to the bathroom,
(E) while drinking tea, talking on the phone, playing with his cat, screaming at some guy three floors below for parking too near his car.
(a) ABCDE
(b) ABCED
(c) AECDB
(d) ACDEB
(e) ADBCE

Q6. (A) This is why the Sanskrit scholar V.S. Sukthankar at the Bhandarkar Oriental Research Institute,
(B) A committee may be asked to assess what the historian has written.
(C) Assigning texts such as the Mahabharata and the Ramayana to particular dates is always complicated and becomes controversial as these kinds of texts, often called epics, are rarely written at a specific date since they tend to be added to at various points in time.
(D) History is generally not written by committees but by individual historians.
(E) who edited the critical edition of the Mahabharata, gave a span of time [of when the epic was written and added to] from 400 BC to 400 AD.
(a) DBACE
(b) DACBE
(c) DCABE
(d) DEABC
(e) DBCAE

Q7. (A) with a common thread binding them: passion for music.
(B) Over the weekend, Trooze, a newly-formed startup,
(C) An architect, an engineer and a student walked into a café. Hold on,
(D) this isn’t the beginning of a joke, but of a memorable evening at Aegam in Gowrivakkam near Tambaram.
(E) brought together twenty-somethings from different fields
(a) CDBEA
(b) CDABE
(c) CEABD
(d) CBADE
(e) CADBE

Q8. (A) Readers are free to ascribe and posit their own levels of subjectivity or objectivity to this interview.
(B) I wish to make it abundantly clear that the answer to that question is a resounding ‘Yes’.
(C) For a musician, who routinely attracts gushing praise from fans, critics and musicians alike, I can afford to remain understated.
(D) If it helps, I can only plead in extenuation that it is far more difficult for a close relative to conduct such an interview than it would be for an outsider.
(E) Will there be an obvious bias towards the subject?
(a) EADCB
(b) EDCBA
(c) EBDCA
(d) EBADC
(e) ECDBA

Q9. (A) With equal attention bestowed upon every suite, the alapana acquired a chiaroscuro of shadja-varja sancharas that balanced out the ravai phrases at the tara sthayi.
(B) Banking on a rich timbre warmed by depth and enhanced by an effortless traverse across octaves,
(C) It was a well-rounded essay, yet one that left you with the feeling that the artiste was capable of more.
(D) vocalist R. Ashwath Narayanan embarked on a Thodi alapana, at his concert in Chennai, that was a judicious blend of vilamba and madhyama kala prayogas buttressed by sturdy pidis.
(E) Voice stood the artiste in good stead with evenness in tone evident in three sthayis.
(a) BDECA
(b) BDEAC
(c) BEDAC
(d) BCEDA
(e) BADEC

Q10. (A) The idea has lost its novelty, but there was a time when stating it had to come with proof.
(B) That a woman could love and hate and have the same virtues and vices as a man rarely found its way into Malayalam cinema.
(C) That a woman equalled a man was a revolutionary thought, and any venture into this still nebulous moral universe needed constant reassuring.
(D) Given the churn today about the status of women, it is time we paid attention to one of Malayalam cinema’s greatest directors,
(E) and its greatest ethicist of man-woman relationships, K.G. George.
(a) ACBDE
(b) ADCBE
(c) ABCDE
(d) ABDCE
(e) AEDCB