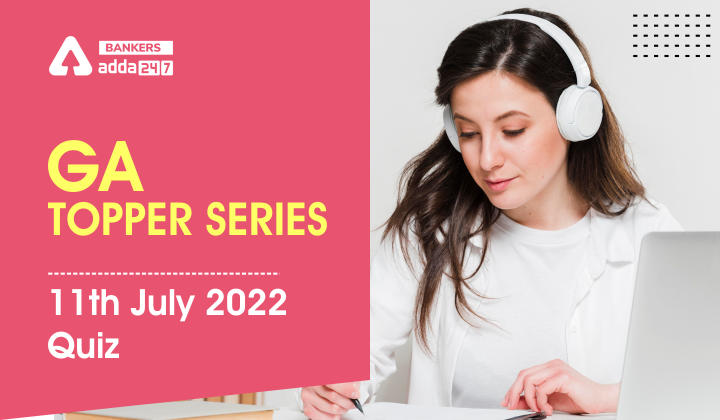 GA Topper Series: 10-11th July 2022: Hello Students, all those students who have cleared their prelims exams in the banking sector must be prepared with every topic in the General Awareness Section for the mains examinations. Bankersadda team has brought you up a new series in which we will come up with 10 questions with the correct answer and the detailed solution to the question.

Q1. Which company receives the Bureau of Indian Standards (BIS) certification for its 21700 cylindrical NMC811 lithium-ion cells made using its home-grown technology?

Q2. Yuva Sammelan organized by which institution in Newdelhi?

(b) My Home India

Q3. Who today called for a mass movement to revive Sanskrit learning where all the stakeholders should contribute to the re-discovery of India’s rich classical literature and cultural heritage?

Q5. In “India Stack Knowledge Exchange” ,there are three thematic sessions. Choose which is not one of them.

(b) Technology Stack for e-Commerce

Q6. In which year Central Consumer Protection Authority was established?

Q8. Who is the governor of the state where amaranth is situated?

Q9. The 2022 Global biodiversity conclave is organized in which country?

Q10. Which of the following is part of India Digital Agriculture Ecosystem?

Hyderabad-based GODI India Private Limited has become India’s first company to receive Bureau of Indian Standards (BIS) certification for its 21700 cylindrical NMC811 lithium-ion cells made using its home-grown technology. As per BIS requirements, the Godi-designed cells were tested and qualified by a third-party testing agency (TUV).

The Vice President, Shri M. Venkaiah Naidu called for a mass movement to revive Sanskrit learning where all the stakeholders should contribute to the re-discovery of India’s rich classical literature and cultural heritage. “A language cannot be preserved only by Constitutional provisions or Governmental assistance or protection,” he said.

As a part of Digital India Week celebration from 4 July – 9 July 2022, a three days’ dedicated event titled “India Stack Knowledge Exchange” is being organized from 7 July to 9 July 2022. The four sessions were held on 8th July 2022 as part of the virtual event.

The programme came to its culmination with the three brainstorming thematic sessions on ‘Urban Stack’, ‘Technology Stack for e-Commerce’ and ‘Space Technology Stack’, followed by a valedictory session on July 9, 2022.

Central Consumer Protection Authority established to promote, protect and enforce the rights of consumers; will function from Indian Institute of Public Administration premises.

The Baahudaa Yatra or the Return Car festival marks the return of Lord Jagannath and His siblings back to Sri Mandir from the Sri Gundicha Temple, after a seven days sojourn.

The three chariots today rolled down the ‘bada daanda’ or the grand road amidst a sea of devotees and are stationed near the Sri Mandir- the divine abode of the deties.

The ritual of Sunaa Besa will be held in which the chariot -borne deties will be adorned with golden attire.

The local administration and the temple administration have made elaborate security arrangements in view of the heavy rush of devotees tomorrow who flock to the holy city to have a glimpse of the deties in ‘Sunaa Besa’.

Prime Minister Narendra Modi said that rescue and relief operations are underway near the Shree Amarnath Cave. Expressing anguish over the cloud burst near the holy cave, Mr. Modi said, he has spoken to Lieutenant Governor of Jammu and Kashmir Manoj Sinha and took stock of the situation.

The 2022 Global biodiversity conclave is organised in Bonn, Germany. Intergovernmental Science-Policy Platform on Biodiversity and Ecosystem Services (IPBES) announced that Assessment on the Sustainable Use of Wild Species will be released.
Sustainable use of wild species keeping in mind the well-being of communities that depend on them for livelihood will be the focus of the report to be released.

Digital India Corporation (DIC) has taken-up a project on ‘Mobile Based Agro Advisory Services (m4agri) in two states of North-Eastern Region i.e Mizoram and Tripura with a special focus on livestock and fish farmers with the respective domain institutions of Central Agricultural University, Imphal