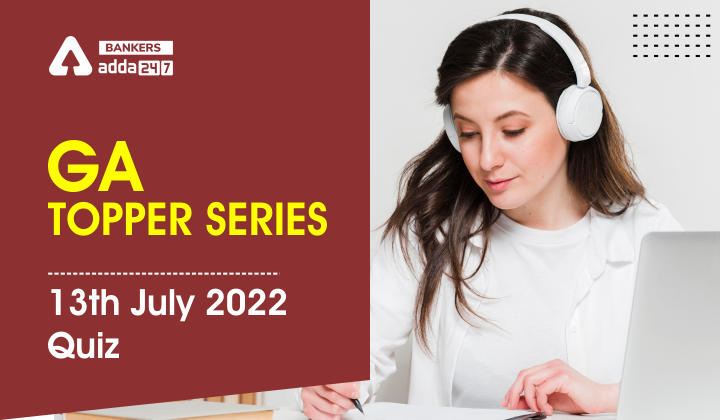 GA Topper Series: 13th July 2022: Hello Students, all those students who have cleared their prelims exams in the banking sector must be prepared with every topic in the General Awareness Section for the mains examinations. Bankersadda team has brought you up a new series in which we will come up with 10 questions with the correct answer and the detailed solution to the question.

(a) Dramatic and Fantastic

(b) Fantastic and Dramatic

Q5. Meet the Champion Programme was started in Jharkhand, Deepika Kumari And Atanu started the scheme. These players belong to which sports?

Q6. Who is the Chairman of Delimitation Commission for Municipal corporation of Delhi?

Q7. Which edition of Risk Survey States Credit demand is released by RBI?

Q8. Government of Japan has conferred the Order of the Rising Sun, Gold and Silver Star award on whom?

Q9. What is the name of the scheme to inspire countrymen to hoist the national flag at their homes to mark the 75th Independence Day?

Q10. When the Flag Code of India was enforced?

Every year, World Paper Bag Day is observed on July 12 to raise awareness of the importance of using paper bags instead of plastic bags.

The theme for Paper Bag Day this year is, “If You’re ‘fantastic’, Do Something ‘dramatic’ To Cut The ‘Plastic’, Use ‘Paper Bags’.”

Jharkhand came out on top in the Syama Prasad Mookerjee Rurban Mission’s delta ranking for the month of June with a composite score of 76.19.

The National Highways Authority of India (NHAI) and Maharashtra Metro achieved the world record for constructing the longest double-decker bridge with a length of 3.14 km in Nagpur.

India’s Pallavi Singh has won the Mrs Universe Divine Title at the finals held at Yeosu City, South Korea. She hails from Kanpur, India, and has made her country proud in this contest that saw participation from 110 countries.

India’s biggest archery stars Deepika Kumari and Atanu Das kicked off the ‘Meet The Champion’ Programme in the state of Jharkhand at Ranchi on Tuesday. A huge gathering of more than 300 students from 75 schools across the district attended the interactive session on ‘Santulit Aahar’, fitness and sports held in Delhi Public School, SAIL Township, Ranchi.

A 3-member delimitation commission has been established by the Ministry of Home Affairs (MoHA), in accordance with its power under sections 3, 3A, and 5 of the Delhi Municipal Corporation (DMC) Act 1957, to assist the Central Government in delimitation of municipal wards in Delhi and carrying out other functions related to it

RBI 22nd Systemic Risk Survey states Credit demand to improve in next 3 months; Eases FPI, NRI Deposit Norms to Prevent Rupee slide According to the Reserve Bank of India’s (RBI) 22nd round of Systemic Risk Survey (SRS), which was conducted in May 2022demand for credit, is expected to see marginal to considerable improvement in the next three months.

The Government of Japan has conferred the Order of the Rising Sun, Gold and Silver Star award on Narayanan Kumar, Vice Chairman of the Sanmar Group, for his contribution to strengthening economic relations between Japan and India.

The Central government will soon launch a nationwide campaign Har Ghar Tiranga to inspire countrymen to hoist the national flag at their homes to mark the 75th Independence Day. The initiative has been taken under the aegis of Azadi ka Amrit Mahotsav, for which the Ministry of Culture is the nodal ministry. The Indian National Flag is a symbol of national pride for the entire nation and to further honor the national flag, Union Home Minister Amit Shah who oversees all efforts under Azadi Ka Amrit Mahotsav has approved the program of ‘Har Ghar Tiranga’.