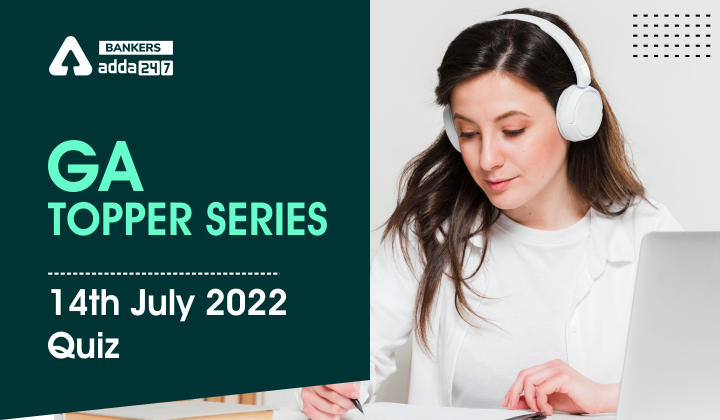 GA Topper Series: 14th July 2022: Hello Students, all those students who have cleared their prelims exams in the banking sector must be prepared with every topic in the General Awareness Section for the mains examinations. Bankersadda team has brought you up a new series in which we will come up with 10 questions with the correct answer and the detailed solution to the question.

Q3. What is the name of the Father of Indian Internet who passed away recently?

(a) James Edmund Can

Q4. National Fish Farmers Day is annually celebrated on 10th July to commemorate the demonstration of Hypophysation by whom ?

Q5. India celebrates National Students Day on 9 July to commemorate the foundation of which institute?

Q6. Earn and learn is scheme of which state government?

Q7.  Who has been appointed as the MD & CEO of Eureka Forbes?

Q8. From where James Webb Space Telescope is launched?

Q9. What is the purpose of SAH-BHAGITA scheme of Delhi?

(a) Startup in Delhi

(b)To increase the involvement of RWA

Q10. Who is the owner of Akasa Air who recently received its air operator certificate from DGCA?

The renowned American actor, James Edmund Caan passed away at the age of 82 years in California, the United States of America(USA). He is best known for playing the Sonny Corleone character in ‘The Godfather’ film.

Brijendra Kumar Syngal(BK Syngal), former Chairman of Videsh Sanchar Nigam Ltd (VSNL), was a pioneer in the Indian Telecommunication Sector and was referred to as the “Father of Indian Internet” has passed away at the age of 82

National Fish Farmers Day is annually celebrated on 10th July to commemorate the demonstration of Dr K. H. Alikunhi and Dr H. L. Chaudhary for the successful contribution in demonstrating Hypophysation (technology of induced breeding) in Indian Major Carps (common name for several species of fish) on 10th July 1957 at the former CIFRI Pond Culture Division in Angul, Odisha. The 22nd National Fish Farmers Day was celebrated on 10th July 2022 across India. It is celebrated by the Department of Fisheries, Ministry of Fisheries, Animal Husbandry and Dairying in association with the National Fisheries Development Board (NFDB). The day is also observed as the NFDB Foundation day. 2022 marks the 16th NFDB Foundation day. Objective- to establish solidarity with all fisher folk, fish farmers and concerned stakeholders across India

The Tripura Government has decided to revive the Vidyalaya Chalo Abhiyan (Let’s Go to School) and, as part of it, has established a new scheme, “Earn with Learn”, to re-enroll students who had dropped out of school following the outbreak of the COVID-19 pandemic

Pratik Pota was appointed by PE firm Advent International to run Eureka Forbes, one of its portfolio companies. Pratik will join Eureka Forbes as MD & CEO.

The public enterprise’s selection board (PESB) has selected Sanjai Kumar for the post of Chairman & Managing Director, RailTel Corporation of India Ltd (RCIL)

Governing council of the International Fund for Agricultural Development (IFAD) has been appointed as Spain’s Alvaro Lario new President.

Rajendra Prasad has been appointed as the Managing Director of National High-Speed Rail Corporation Limited (NHSRCL).

Lieutenant Governor (L-G) VK Saxena has announced significant changes in the property tax policy of the Municipal Corporation of Delhi (MCD) after its unification. The L-G also launched a SAH-BHAGITA scheme to increase the involvement of the Residential Welfare Association (RWAs) in optimal tax collection and waste management systems.

Billionaire investor Rakesh Juhunjhunwala-owned, Akasa Air has been cleared for take-off. The no-frills airline received its air operator certificate (AOC) from the Directorate General of Civil Aviation (DGCA). The airline will start its operations at the end of July