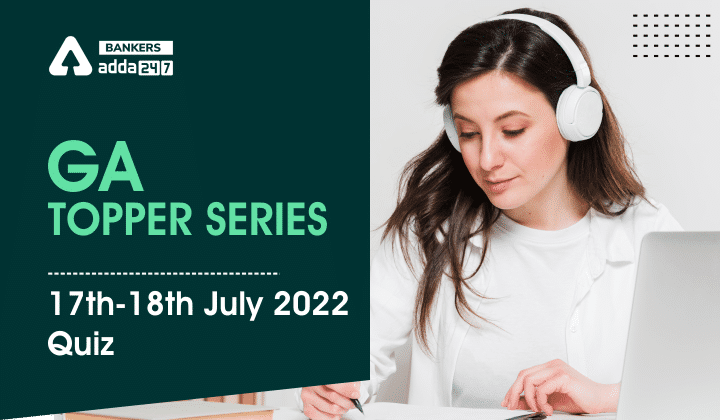 GA Topper Series: 17th-18th July 2022: Hello Students, all those students who have cleared their prelims exams in the banking sector must be prepared with every topic in the General Awareness Section for the mains examinations. Bankersadda team has brought you up a new series in which we will come up with 10 questions with the correct answer and the detailed solution to the question.

Q1. Who is he candidate of opposition parties for the vice presidential elections?

Q2.What is the name of the project aimed at giving a boost to usage of indigenous technology in the indian navy?

Q3. Which two places of india got place in TIME magazine list of the world’s Greatest places?

Q4. 3-FIR Service is launched by which state?

Q5. T-Pulse HSSE Monitoring System has been deployed by Vedanta for incident detection, It has parterned with which IIT Based Startup?

Q7. What is the name of the subscheme under mission Shakti, Ministry of women and child development?

(a) Sambal and vatsalya

(b) Ministry of Home Affairs

Q9. Scheme for rebate of state and central taxes and levies is under which ministry?

(a) Ministry of Commerce and Industry

Q10. Which state has its own internet services?

Margaret Alva will be the opposition’s candidate for Vice Presidential Election which will be held on 6th of next month.

SPRINT Challenges’, aimed at giving a boost to usage of indigeneous technology in the Indian Navy.

One of the key pillars of Aatmanirbhar Bharat is to attain self-reliance in the Defence Sector. To take this endeavour forward, the Prime Minister will unveil ‘SPRINT Challenges’, aimed at giving a boost to usage of indigeneous technology in the Indian Navy.

As a part of ‘Azadi ka Amrit Mahotsav’, NIIO, in conjunction with the Defence Innovation Organisation, aims at inducting at least 75 new indigenous technologies and products in the Navy. This collaborative project is named SPRINT, which stands for SPRINT stands for Supporting Pole-Vaulting in R&D through iDEX, NIIO and TDAC.

The TIME Magazine in its first list of the World’s Greatest Places of 2022 named India’s Ahmedabad (Gujarat), and Kerala among the 50 extraordinary destinations to explore. It should be noted that Ahmedabad is India’s first UNESCO World Heritage City

The e-FIR service and the Uttarakhand police app were introduced by chief minister Pushkar Singh Dhami. The State police’s five online services are all integrated into the police app. Dhami, who spoke at the event, asserted that the app will provide better services to the public. On behalf of the government’s policy of simplification, solution, and resolution, he noted that this is a commendable endeavour. This is a commendable effort to put Prime Minister Narendra Modi’s concept of smart policing into practise.

In order to implement safety incident detection, metal and oil and gas company Vedanta has partnered with Detect Technologies, a startup established at IIT Madras, and deployed T-Pulse HSSE Monitoring System across all of its business units. The partnership is consistent with the Vedanta Group’s objective to achieving zero harm through the implementation of AI-enabled safety monitoring of workplaces, which is a key priority in its roadmap for digital transformation.

the foundation day of ICAR should be celebrated as ‘Sankalp Diwas’. it has been 93 years since the setting up of the ICAR. “Since its establishment in the year 1929 till date, about 5,800 seed-varieties have been released by it, including about 2,000 of these varieties released in the eight years since 2014 till now

Mission Shakti : To improve accessibility to various government services available for women at various levels It has two sub-schemes ‘Sambal’ and ‘Samarthya’. Guidelines were introduced recently.

Under the guidelines, the Women Helplines (WHL) running under 181 number will be integrated with Emergency Response Support System number 112 for all emergency assistance and with One Stop Centre (OSC) and other platforms like 1098 Child line.

Government of India has launched ‘Mission Shakti’ – an integrated women empowerment programme during the 15th Finance Commission period 2021-22 to 2025-26.

In a National e-Governance Service Delivery Assessment, the Ministry of Home Affairs (MHA) website is ranked first under the Central Ministries Portal. The Digital Police Portal is ranked number 2 under the Central Ministry Services Portal. This was unveiled in the National e-Governance Service Delivery Assessment done by the Department of Administrative Reforms and Public Grievances (DARPG) in collaboration with its knowledge partners, NASSCOM (National Association of Software and Services Companies) and KPMG in 2021

The Ministry of Commerce and Industry (MoCI) approved the continuation of the Scheme for Rebate of State and Central Taxes and Levies (RoSCTL) with the same rates as announced by the Ministry of Textiles for exports of apparel/garments and made-ups until March 31, 2024.

Kerala has become the first and the only state in India to have its own internet services through the Kerala Fibre Optic Network (KFON) Limited’s KFON project, an Information Technology (IT) Infrastructure project that aims to provide internet access to everyone in Kerala