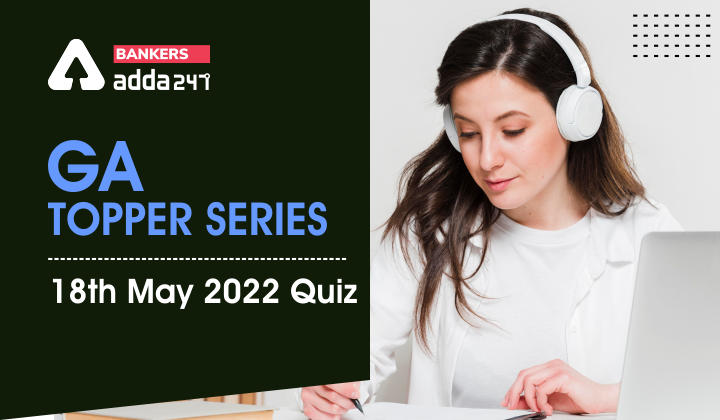 GA Topper Series: 18th May 2022 Quiz: Hello Students, all those students who have cleared their prelims exams in the banking sector must be prepared with every topic in the General Awareness Section for the mains examinations. Bankersadda team has brought you up a new series in which we will come up with 10 questions with the correct answer and the detailed solution to the question.

Q2.  Which of the following cups is not related to badminton?

Q3. Consider the statements regarding the RBI central board:

Q4. What is the full form of the PM-WANI scheme?

Q5. What is the capital of Somalia and who became the president of the country?

Q6. What is SARAS Mark 2 and who designed it?

Q7. Match the following vectors with their diseases

Q8. India International centre for Buddhist culture and heritage is being established at Lumbini. In Buddha’s lifetime what incident occurred at Lumbini?

Q9. Atal Innovation Mission is extended to which date?

Q10. What is the fullform of ULIP?

Hypertension is known as the “silent killer”. Because hypertension has no warning signs or symptoms, most people are unaware they have it. Every year World Hypertension Day is observed on the 17th of May.

The World Telecommunication and Information Society Day (WTISD) is observed each year on 17th may to increase awareness of the benefits and opportunities that the Internet.

Appointed/nominated for a period of four year

Recent in news: Rajiv Ranjan and Sitikantha Pattanaik have been named executive directors by the Reserve Bank of India (RBI).

Recent News: The digital anti-skid brake management system designed for SARAS Mark 2, 19 seat Light Transport aircraft, has been successfully validated by the National Aerospace Laboratories(NAL) in Bengaluru, Karnataka. NAL is part of the Council of Scientific and Industrial Research(CSIR) labs

The intended targets that will be achieved by AIM are:

ULIP is designed for enhancing efficiency and reducing the cost of logistics in India by creating a transparent, single-window platform to provide real-time information to all stakeholders. It was emphasized that the solution should have visibility of multi-modal transport and all the existing systems should be integrated with the ULIP system to create a National Single Window Logistics Portal. ULIP will provide real-time monitoring of cargo movement and ensure confidentiality of data with end-to-end encryption. It will also provide for a comprehensive reduction in logistic costs.