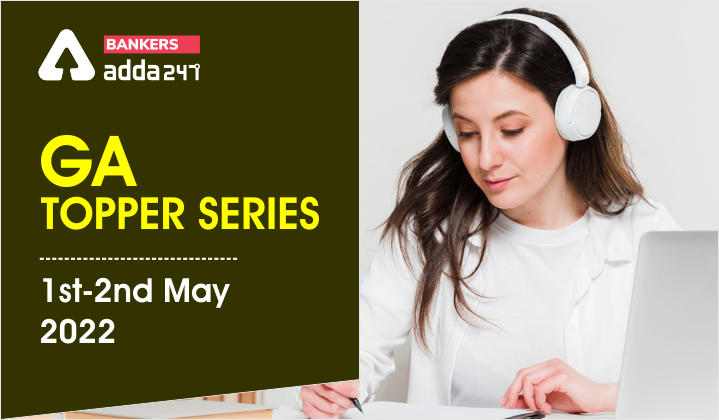 GA Topper Series: 1st-2nd May 2022: Hello Students, all those students who have cleared their prelims exams in the banking sector must be prepared with every topic in the General Awareness Section for the mains examinations. Bankersadda team has brought you up a new series in which we will come up with 10 questions with the correct answer and the detailed solution to the question.

Q1. In which year does the Kisan credit card scheme launch?

Q2. First world laughter day was organized at which place?

World Laughter Day was first celebrated in Mumbai in 1998 when Dr. Madan Kataria, founder of the Laughter Yoga Movement. This year it was on the 1st of May.

The Semicon India Conference-2022 will be inaugurated by Prime Minister Narendra Modi in Bengaluru.

The Sitio Burle Marx site, a landscape garden in the Brazilian city Rio de Janeiro has been added to UNESCO’s list of World Heritage sites.

Q6. National Behaviour Change Communication Framework for Garbage Free Cities’ has been launched under which scheme?

(d) all of the above

Swachh Bharat Mission-Urban 2.0 under the aegis of the Ministry of Housing and Urban Affairs has launched the ‘National Behaviour Change Communication Framework for Garbage Free Cities’ to strengthen the ongoing Jan Andolan for ‘Garbage Free Cities’.

(c) Federation of Indian Chambers of Commerce and Industry

Q8. Whitley gold award is given for?

(b) to stop gold smuggling

(a) leh to ladakh

The construction of the Atal Tunnel connecting Manali with Leh is the world’s longest highway tunnel above 10,000 feet. It got the best infrastructure award by IBC.

India, China, Russia, and four other countries were added to the US’s annual ‘Priority Watch List for intellectual property protection and enforcement. Argentina, Chile, Indonesia, and Venezuela are among the other countries on the Office of the United States Trade Representative’s list in the special 301 reports.