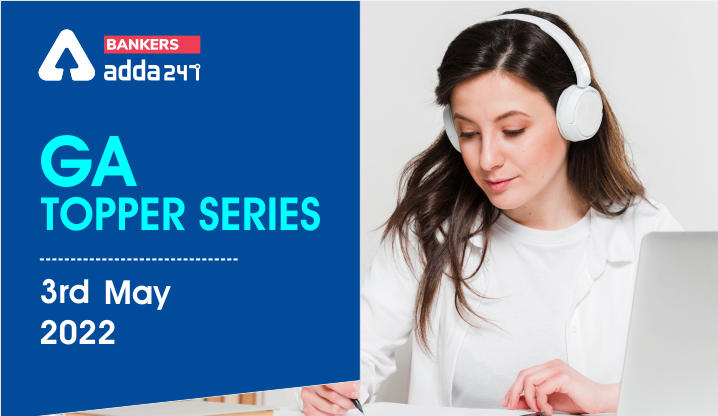 GA Topper Series: 3rd May 2022: Hello Students, all those students who have cleared their prelims exams in the banking sector must be prepared with every topic in the General Awareness Section for the mains examinations. Bankersadda team has brought you up a new series in which we will come up with 10 questions with the correct answer and the detailed solution to the question.

Q1. Which book is written by Rashid Kidwai?

(a)The House of Scindias: A Saga of Power, Politics, and Intrigue

(b) Not Just A Nightwatchman: My Innings with BCCI

Rashid kidwai book- The House of Scindias: A Saga of Power, Politics, and Intrigue

Q2. World press freedom day was celebrated on may 3rd. It first celebrated in which year and came under what declaration?

In 1993 when the United Nations General Assembly declared 3rd May as the world freedom press day. This declaration came after a recommendation made in 1991 at the twenty-sixth general conference session of UNESCO. The declaration also came as a result of the 1991 Windhoek Declaration.

Q4. International Research Conference on Insolvency and Bankruptcy is organized by which of the Indian Institute of management?

The conference was organized by the Insolvency and Bankruptcy Board of India (IBBI), jointly with the Indian Institute of Management Ahmedabad (IIMA).

Q5. Which of the following is not a NATO exercise?

Recently NATO exercise – swift response, defender Europe were held in Poland. Cold response and Neptune strike are other nato exercises of year2022. Cope south is an exercise between the US and Bangladesh.

Q6. What is the fullform of KMP?

On the lines of the revised Scale Based Regulatory (SBR) framework for Non-Banking Finance Companies (NBFCs), the Reserve Bank of India (RBI) has issued guidelines on the compensation of Key Managerial Personnel (KMPs) and senior management in NBFCs under the SBR framework.

Q7. The investment limit of all insurance companies to invest in the Financial and Insurance activities has been increased by IRDAI by how much percentage?

The Insurance Regulatory and Development Authority of India (IRDAI, has increased the investment limit of all insurance companies to invest in the Financial and Insurance to 30% of investment assets from 25%, which means the increase is 5%

The winner of the 2022 badminton Asia championship is won by Wang Zhiyi in the women’s single.

Q9. The theme of the “Report on Currency and Finance (RCF)” by RBI is?

(a) Revive and reconstruct

(c) On recovering from the pandemic

(d) Reconstruction is the key

The theme of the Report is “Revive and Reconstruct” in the context of nurturing a durable recovery post-COVID and raising trend growth in the medium-term. The Report reflects the views of the contributors and not of the Reserve Bank.

Q10. Which Company launched M15 Petrol, with a 15 percent blend of methanol with petrol in which state?

Indian Oil Corporation (IOC) launched M15 petrol on a pilot basis in Assam’s Tinsukia district. It has a 15 percent blend of methanol with petrol.