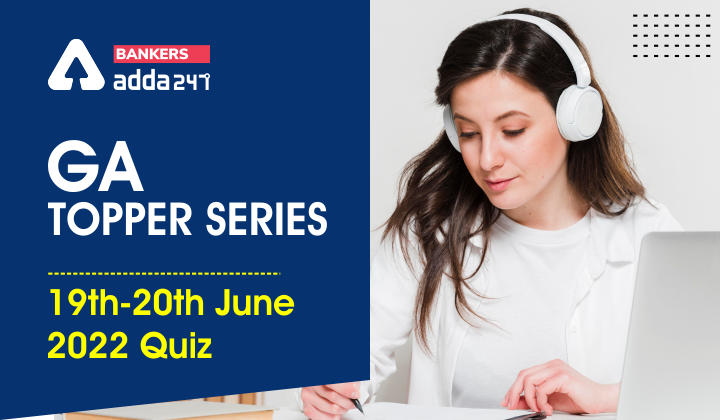 GA Topper Series: 19th-20th June 2022 Quiz: Hello Students, all those students who have cleared their prelims exams in the banking sector must be prepared with every topic in the General Awareness Section for the mains examinations. Bankersadda team has brought you up a new series in which we will come up with 10 questions with the correct answer and the detailed solution to the question.

Q1. Which of the following is the definition of worker population ratio?

(a) The percentage of persons in the labour force (i.e. working or seeking or available for work) in the population.

(b) The percentage of employed persons in the population

(c) The percentage of labourers in the organized sector

Q2. Where did the prime minister inaugurate the ‘Gallery of Revolutionaries’?

Q3. According to the annual Global Trends Report by the United Nations Refugee Agency, United Nations High Commissioner for Refugees (UNHCR), how many people are displaced internally in India?

Q5. Where UNFCCC 27th COP is going to take place?

Q8. According to the Burgundy Private Hurun India 500 Special Report(SR), _______ is the most valuable unlisted company in India.

Q9. What is the theme of World Day to Combat Desertification and Drought 2022?

(a) Drought game over

(b) Rising up from drought together

These are the important definitions

Labour Force Participation Rate(LFPR): It is defined as the percentage of persons in labour force (i.e. working or seeking or available for work) in the population.

Worker Population Ratio WPR is defined as the percentage of employed persons in the population.

CWS: The activity status determined on the basis of a reference period of the last 7 days preceding the date of the survey is known as the current weekly status (CWS) of the person.

Prime Minister(PM) Narendra Modi inaugurated the underground ‘Gallery of Revolutionaries’ museum at Maharashtra’s Raj Bhavan in Mumbai, Maharashtra. The gallery is dedicated to the luminaries of the freedom struggle.

According to the annual Global Trends Report by the United Nations Refugee Agency, United Nations High Commissioner for Refugees (UNHCR) published in June 2022, nearly 5 million people in India were internally displaced due to climate change and disasters in 2021.

According to the Renewables 2022 Global Status Report (GSR 2022) published by the global renewable energy community REN21, India placed third in the world for total renewable power capacity additions in 2021, with 15.4 GW (gigawatts), following only China (136 GW) and the United States (US) (43 GW).

The 27th session of the Conference of the Parties (COP 27) to the UNFCCC will take place in Sharm El-Sheikh, Egypt

Securities and Exchange Board of India (SEBI), the capital markets regulator, has formed a Building Advisory Committee to advise and assist on premises-related matters like planning, acquisition and furnishing. This is a seven-member committee, headed by B K Katyal, former Chief General Manager at the Reserve Bank of India (RBI)

National Stock Exchange of India(NSE) is the most valuable unlisted company in India growing by 35.6% to Rs 2,28,100 crore