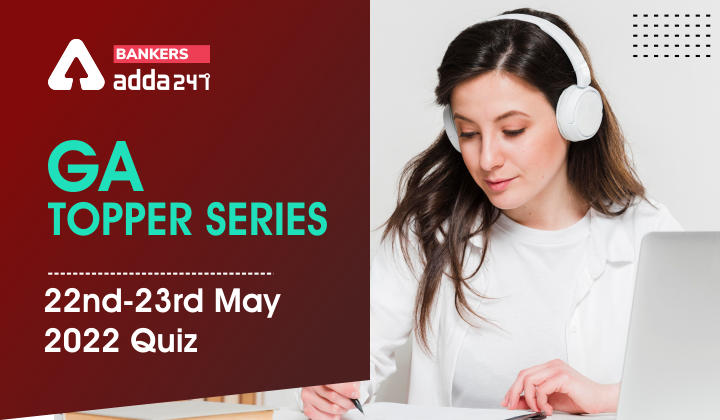 GA Topper Series: 22nd-23rd May 2022 Quiz: Hello Students, all those students who have cleared their prelims exams in the banking sector must be prepared with every topic in the General Awareness Section for the mains examinations. Bankersadda team has brought you up a new series in which we will come up with 10 questions with the correct answer and the detailed solution to the question.

Q1. With which institution does the ministry of railways has collaborated on Hyperloop technology?

Q2. Under which have act sovereign guarantees undertaken during the financial year? At how much percent of GDP it is capped?

(b) Fiscal Responsibility and Budget Management (FRBM) Act of 2003.

(d) all of the above

Q3. With which organization did Government e-Marketplace (GeM) sign an MOU for capacity building of last-mile women-led Micro and Small Enterprises?

(a) Self Employed Women’s Association (SEWA)

Q4. CBSE has instructed all the CBSE affiliated schools to form the ‘Yuva Tourism Club’. This scheme is under which ministry?

(a) Ministry of education

(b) Ministry of Tourism

Q5. Who has installed the world’s highest weather station on Mt Everest?

Q6. Panda bonds are issued In which currency denomination?

Q7. What is the full of the CHES project of China?

Q8. Which company acquired the franchise of the UAE T20 league in may?

Q9. Who has bought WealthDesk and OpenQ, wealth management funds?

Q10. What is the name of the Airship flown over Mount Everest to study the Atmospheric Composition of Mount Everest?

IIT Bombay has partnered with the Ministry of Earth Sciences’ IMD to develop climate solutions for stakeholders at the village, city, and district levels

L&T has signed an agreement with the IIT Bombay to jointly pursue research and development work in the Green Hydrogen.

Recently government released a new government guarantee policy (GGP). The need for a new GGP has become essential as the volume of sovereign guarantees undertaken during a financial year is capped under the Fiscal Responsibility and Budget Management (FRBM) Act of 2003. The Act states that the Central Government will not provide guarantees aggregating to an amount of more than 0.5 % of GDP in any financial year

SEWA was founded by Ela Bhatt’s headquarters at Ahemdabad.

CBSE has instructed all the CBSE affiliated schools to form Yuva Tourism Club. The Ministry of Tourism initiated the establishment of the ‘YUVA Tourism Clubs’, as part of the ‘Azadi ka Amrit Mahotsav’ celebrations, to promote the national integration and the spirit of Ek Bharat Shreshtha Bharat. These clubs are expected to facilitate the development of soft skills like teamwork, management, and leadership besides encouraging the adoption of responsible tourism practices and concern for sustainable tourism.

National geographic society (NatGeo ) installed World’s Highest Weather Station on Mt. Everest at an altitude of 8,830 metres to automatically measure various meteorological phenomena. Nepal’s Department of Hydrology and Meteorology (DHM) said the automatic weather station was installed a few metres below the summit point last week as the snow and ice on the summit are not suitable for fixing equipment

The project, named Closeby Habitable Exoplanet Survey (CHES) would be the first space mission specially designed to search for habitable terrestrial planets around nearby Sun-like stars.

Chinese scientists have proposed a space project to survey the sky through a space-borne telescope to hunt for habitable Earth-like planets outside the solar system, about 32 light-years from Earth.

Adani Sportsline, a subsidiary of the Adani group, has acquired the right to own and operate a franchise in the six-member United Arab Emirates (UAE) T20 League. By acquiring the franchise, it becomes the fourth Indian group after Reliance Industries (RIL), Grandhi Mallikarjuna Rao (GMR) group, and Capri Global.

PhonePe is acquiring two wealth management firms for $75 million in total. WealthDesk will cost roughly $50 million, while OpenQ will cost nearly $25 million, including debt, according to people familiar with the situation who asked not to be identified because the facts are confidential.

China Flies Airship at Record Altitude, Higher than Mount Everest China has flown an airship named Jimu No.1 over Mt Everest at a record height of 9,032 metres in order to study the Atmospheric Composition Data and the Water vapour transporting process from the surface.