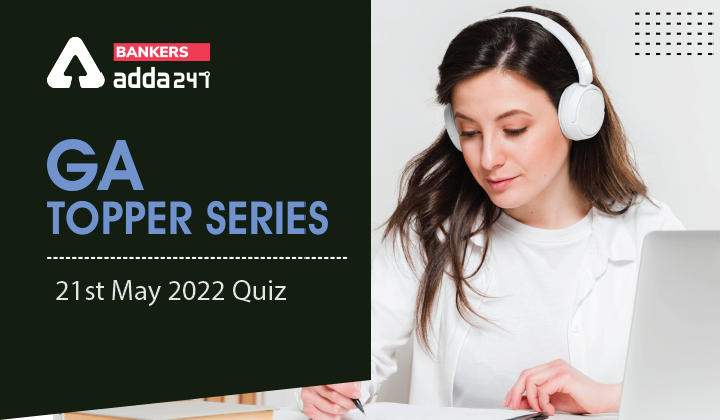 GA Topper Series: 21st May 2022 Quiz: Hello Students, all those students who have cleared their prelims exams in the banking sector must be prepared with every topic in the General Awareness Section for the mains examinations. Bankersadda team has brought you up a new series in which we will come up with 10 questions with the correct answer and the detailed solution to the question.

Q1. Consider the following statements regarding National policy on biofuels:

Q2. When was the new public sector enterprises policy launched?

Q3. On the occasion of technology day, SSR and SRIMAN guidelines were launched. What is the fullform of SRIMAN?

Q4.Government e-marketplace (GeM) has signed an MoU with whom for capacity building of last mile government sellers?

Q5.Vodafone has signed an MoU to develop IoT/M2M solution with whom?

Q6. The state of inequality in India report was released by an economic advisory council. The report is based on

Q7. In which country first pop-up airport air one is opened?

Q8. NASA’s DART mission was in news recently. It is for which purpose?

(a) study moons of Jupiter

(c) to deflect an asteroid

Q9. What is the name of the OTT platform going to be launched by one of the Indian states? Name the state as well

Q10 The first wax museum Madame Tussauds was located at?

Both the statements are correct.

Recently there were amendments to the National Policy on Biofuels 2018. Under this, the target of 20% ethanol-petrol blending advanced by 5 years to 2025-26 from 2030.

Presently the national policy on biofuels comes under the ministry of petroleum.

In recent news: the government approved the proposal for empowering the Board of Directors (BoDs) of the holding/parent Public Sector Enterprises (PSEs) to recommend and undertake the disinvestment (both strategic disinvestment and minority stake sale) or closure of any of their subsidiaries/units/stake in joint ventures (JVs).

The decision is in line with the new PSE policy, 2021 to minimize the presence of government PSEs.

The SSR is an institutional mechanism with a broad goal to harness the latent potential of the scientific community on a voluntary basis, for promoting science-society linkages and hence make the S&T ecosystem responsive to societal requirements

Scientific Research Infrastructure Sharing Maintenance and Networks (SRIMAN) Guidelines drafted by the Department of Science and Technology (DST) of the MoS&T. It aim to create a network of key stakeholders to promote effective use and wider access of research infrastructure

Centre for Development of Telematics(C-DOT), under the Ministry of Communications of India and Vodafone Idea Limited, signed a Memorandum of Understanding (MoU) to develop and deploy IoT/M2M(Internet to things/Machine to Machine) solutions in India.

the State of Inequality in India Report was released by Bibek Roy chief economic advisor. The report is based on the Periodic Labour Force Survey (PLFS), National Family and Health Survey (NFHS), and UDISE+ [Unified District Information System for Education (UDISE)]

Recent in news: Asteroid 388945 has made a close approach to our plane

To protect us from the potentially hazardous asteroids, NASA launched its Double Asteroid Redirection Test (DART) mission, which aims to deflect an asteroid heading towards Earth from its path “through kinetic impact”.

The Kerala government will launch a state-owned over-the-top (OTT) platform named CSPACE on November 1, offering film lovers an array of movies, short films and documentaries of their choice.

The wax museum Madame Tussauds is returning to India. The museum will be located in a Noida mall. 50 Indian and international genres will be featured at the new venue. The first museum was in New Delhi and was shut down due to lockdown.