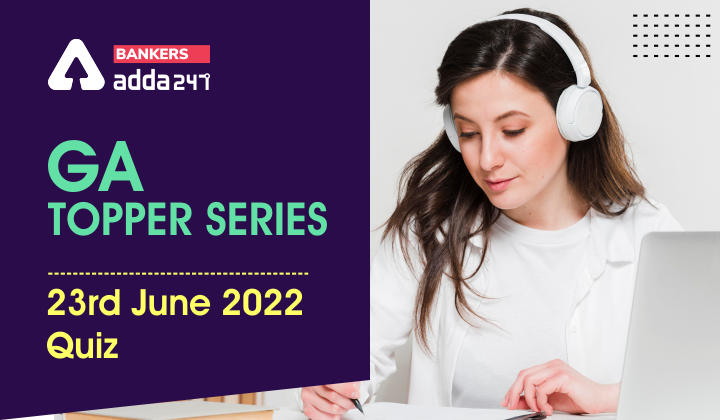 GA Topper Series: 23rd June 2022 Quiz: Hello Students, all those students who have cleared their prelims exams in the banking sector must be prepared with every topic in the General Awareness Section for the mains examinations. Bankersadda team has brought you up a new series in which we will come up with 10 questions with the correct answer and the detailed solution to the question.

Q3. International Day for the Elimination of Sexual Violence in Conflict is celebrated in which month?

Q4. Which Educational institute of India organized the National yoga Olympiad with the Ministry of Education?

Q5. Which edition of International Day of Yoga celebrated in 2022?

Q6. Consider the statements regarding the Prime Minister’s Award for Outstanding Contribution towards the Development and Promotion of Yoga’:

Q7. National Summit on Developing Sustainable and Responsible Tourist Destinations was organized by

Q8. India hosted the 8th meeting of the Heads of Border Services of the competent authorities of member states of the Shanghai Cooperation Organization (SCO) in New Delhi, Chief of which armed forces represented India in the meeting?

Q9. Which of the following comes under the critical information infrastructure of India?

Q10. Which institute/s of India has been awarded the UNESCO King Hamad Bin Isa Al-Khalifa Prize for the use of Information and Communication Technology (ICT) in Education for the year 2021?

(b) Central Board of Secondary Education (CBSE)

The International Day for the Elimination of Sexual Violence in Conflict is an international event conducted by the United Nations (UN) on June 19.

International Day of Yoga is celebrated worldwide on 21st June since 2015.  This year, the 8th edition of the International Day of Yoga will be observed. Yoga is an ancient physical, mental and spiritual practice that originated in India. The word ‘yoga’ derives from Sanskrit and means to join or to unite, symbolizing the union of body and consciousness.

On the occasion of International Yoga Day, the AYUSH ministry has announced to give the ‘Prime Minister’s Award for Outstanding Contribution towards the Development and Promotion of Yoga’ for 2022 to two individuals and two organizations in recognition of their contributions in the space.

Two individuals Bhikkhu Sanghasena from Ladakh, Marcus Vinicius Rojo Rodrigues from Brazil, and two organizations, “The Divine Life Society” from Uttarakhand and the British Wheel of Yoga from the United Kingdom have been chosen for the award. They will also receive ₹25 lakh as a cash prize, a trophy, and a certificate.

This was one of several events being organized in 2022 by India as Chair of SCO’s Regional Antiterrorist Structure (SCO-RATS) mechanism. India became the chair of SCO-RATS on October 28, 2021, for a one-year period.

The Ministry of Electronics and IT (MeitY) has declared the Information Technology (IT) resources of ICICI Bank, HDFC Bank, and National Payments Corporation of India (NPCI) as ‘Critical Information Infrastructure (CII)’ under Section 70 of the IT Act, 2000

The Department of School Education and the MoE gained UNESCO recognition for their use of ICT during the COVID-19 pandemic under PM eVIDYA.

It will be awarded to the “Initiatives for Inclusive and Accessible Education during COVID19” implemented by the CIET from India, and the “Digital Educational Programme” implemented by Ubongo from the United Republic of Tanzania.

The UNESCO King Hamad Bin Isa Al-Khalifa award was established in 2005 with the support of the Kingdom of Bahrain.