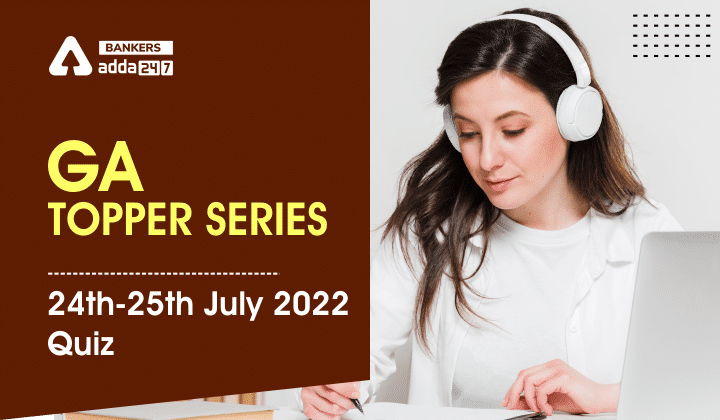 GA Topper Series: 24-25th July 2022: Hello Students, General Awareness is an essential part of all government exams. Its better to prepare this section daily and revise the same using the factsheet provided. Bankersadda team has brought you up a new series in which we will come up with 10 questions and answers, other options of the question has a related news to it. So don’t miss to read the solutions.

Q1. DigiVaani Call Center is set by which of the following organization:

Q2. Rajkiran Rai G became the MD of National Bank for Financing Infrastructure and Development (NaBFID), He was MD of which of the following PSU Bank?

(a) State Bank of INdia

Q3. What is the name of the India’s first indigenous human passenger drone?

Q5. Which edition of Income Tax Day was celebrated in 2022?

Q6. The World Fragile X Awareness Day is celebrated on which day?

Q7. Who has been appointed by the Srilankan President as the prime minister of Srilanka?

Q9. Which of the following has not been given the Golden Visa?

NASSCOM (National Association of Software and Service Companies) Foundation along with Google has set up a call centre, “DigiVaani Call Center”, in collaboration with a not-for-profit body Indian Society of Agribusiness Professionals (ISAP) to help women farmers to scale up their business.

Financial Services Institutions Bureau (FSIB) has recommended Rajkiran Rai G, Former Managing Director(MD) of Union Bank of India, for the position of MD at the National Bank for Financing Infrastructure and Development (NaBFID).

Scheme for Residential Education for Students in Targeted Areas (SHRESHTA) has been formulated with the objective to provide quality education and opportunities for even the poorest.

Department of Telecommunications has launched the GatiShakti Sanchar portal, which would streamline the application and approval procedure for RoW pan India.

United Nations(UN) designated International Moon Day is annually celebrated on 20 July to commemorate the anniversary of the first landing of the lunar surface by humans on July 20, 1969, with the United States’ Apollo 11 mission

The World Fragile X Awareness Day is marked on 22 July every year to celebrate families impacted by Fragile X and highlight the progress of research to find a cure. On this day, communities around the world come together to shine a light on Fragile X, by illuminating monuments and landmarks globally. World Fragile X Day celebrates families impacted by Fragile X and highlights advancements of research to find effective treatments and ultimately a cure.

Senior politician, Dinesh Gunawardena has been appointed as the new and 15th Prime Minister of Sri Lanka, by President Ranil Wickremesinghe. He succeeds former prime minister Ranil Wickremesinghe, who has been sworn in as the country’s 9th president. Gunawardena, parliamentarian of the Sri Lanka Podujana Peramuna (SLPP) party, took his oath in the capital Colombo in the presence of other senior legislators

England all-rounder Ben Stokes has made a surprise announcement to retire from ODI cricket.

Kamal Haasan, a prominent figure in the Tamil cinema industry, has been given the prestigious Golden Visa by the United Arab Emirates. The Golden Visa has been given to others besides actor Kamal Hasan. Actors Nasser, Mammootty, Mohanlal, Tovino Thomas, Parthiepan, Amala Paul, and Shah Rukh Khan all have received it before Kamal Hasan.

The UAE Golden Visa is an extended resident visa programme which lasts between five and ten years. The visa is perpetually extended. It is given to high performers in a variety of industries, as well as to professionals, investors, and those with potential skills.