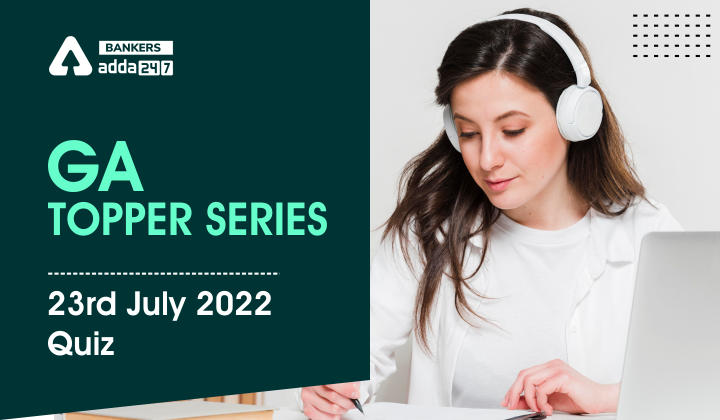 GA Topper Series: 23rd July 2022: Hello Students, all those students who have cleared their prelims exams in the banking sector must be prepared with every topic in the General Awareness Section for the mains examinations. Bankersadda team has brought you up a new series in which we will come up with 10 questions with the correct answer and the detailed solution to the question.

Q1. Who became the new Prime Minister of Kuwait?

Q2. E-commerce market, Flipkart have signed an agreement with which state to start the Supply Chain Operations Academy (SCOA) projects?

Q3. Who has been appointed as Managing Director of ONGC?

Q5. Which company is the first insurer to offer pay as you drive add on feature for motor insurance?

Q6. India had MoU signed with which country for reintroduction of Cheetah in Kuno National Park?

Q7. ‘Digital Banks: A proposal for Licensing and Regulatory Regime for India’ report is released by

Q8. Government of India (GOI) will provide a financing facility worth how much dollars through the World Bank (WB) for the Himachal Pradesh (HP) Power Sector Development Program?

Q9. Which airport is being built as India’s first carbon-neutral airport?

Q10. Which of the following statements are correct :

E-commerce market, Flipkart said that it had signed an agreement with the Bihar State Skill Development Mission to start the Supply Chain Operations Academy (SCOA) projects in the state. According to a release, the programme aims to develop a talent pool of skilled supply chain operations personnel and disseminate pertinent training and expertise of the business.

Rajarshi Gupta has been appointed as Managing Director of ONGC Videsh. He was recommended for the position by the Public Enterprise Selection Board (PESB).

The World Federation of Neurology (WFN) celebrates World Brain Day on every July 22, focusing on a different theme each year. According to WHO, good brain health is a state in which every individual can realize their own abilities and optimize their cognitive, emotional, psychological and behavioural functioning to cope with life situations.

the theme “Brain Health for all” as our brains continue to be challenged by pandemics, wars, climate change and the myriad of disorders impacting human existence globally.

The MoU will allow Cheetahs to be transported to India for historic reintroduction, and this unique intercontinental translocation would be the first of its kind in the world. It was signed on the sidelines of 17th CII-EXIM Bank Conclave on India- Africa Growth Partnership 2022, New Delhi.

Cheetahs will be reintroduced into the Kuno National Park in Madhya Pradesh (MP), with the first batch of cheetahs expected to arrive before August 15, 2022.

Government of India (GOI) will provide a financing facility worth USD 200 million (around Rs. 1600 Crore) through the World Bank (WB) for the Himachal Pradesh (HP) Power Sector Development Program. The total cost of HP Power Sector Development Program will be estimated as approximately 2000 crores along with state equity. The funding from the WB is expected to be available by the beginning of 2023 and the project duration will be completed in five years from 2023 – 2028.

Airports Authority of India(AAI) Leh Airport in Ladakh, is being built as India’s first carbon-neutral airport. A “Geothermal system” in hybridization with Solar Photovoltaic (PV) Plant will be provided in the New airport Terminal Building for heating and cooling purposes. This system works by exchanging heat between the air and the ground as its heat pumps are used for space heating and cooling, as well as water heating.

European Investment Bank (EIB), the lending arm of the European Union (EU), has joined the India-led Coalition for Disaster Resilient Infrastructure (CDRI) as part of efforts to limit damage caused by climate change.

The New Development Bank (NDB) has approved 5 new projects, worth USD 875 million, for water, sanitation, eco-tourism and transport. This investment will that support investment commitment by Brazil, China and India toward Sustainable Development Goals (SDG)