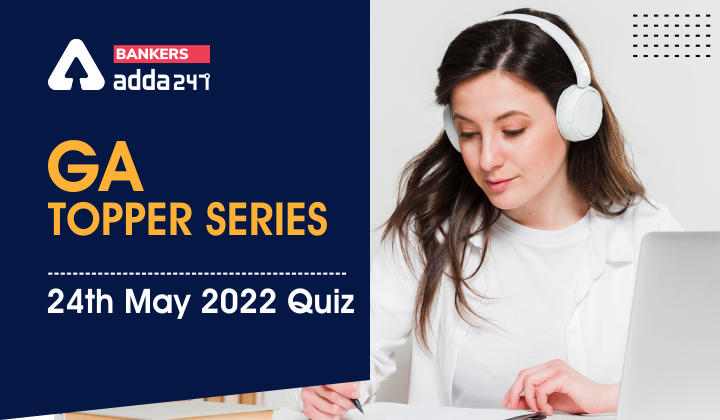 GA Topper Series: 24th May 2022 Quiz: Hello Students, all those students who have cleared their prelims exams in the banking sector must be prepared with every topic in the General Awareness Section for the mains examinations. Bankersadda team has brought you up a new series in which we will come up with 10 questions with the correct answer and the detailed solution to the question.

Q2. A recent report “Severe Wasting: An Overlooked Child Survival Emergency” said India has the world’s most severely wasted children. Who has made the report?

Q3. What was the theme of the world forestry congress?

(a) Building a Green, Healthy, and Resilient Future with Forests

(b) Forest is life

(c) Rebuild the future with forest

(b) NEFT and RTGS

Q5. How many Indian entities are included in the Technology pioneers community initiated by whom?

Q6. What is the theme of world bee day and when it is celebrated?

(b) bee engaged: celebrating the diversity of bees and beekeeping system, 20 May

Q9. What is the name of the portal launched by Dr. Jitendra Singh for a single national portal for biotech researchers?

The United Nations Children’s Fund (UNICEF) has released its UNICEF Child Alert – May 2022 edition, titled “Severe Wasting: An Overlooked Child Survival Emergency.” According to UNICEF, India has the world’s most severely wasted children under the age of five, with 5,772,472 affected children. Indonesia is on the second rank.

The Korea Forest Service (KFS) and Food and Agricultural Organisation (FAO) organized the XV World Forestry Congress (WFC 2021) at Coex, Seoul, Republic of Korea. The theme of XV WFC 2021 is “Building a Green, Healthy, and Resilient Future with Forests”

The Central Government has rolled out the NEFT, RTGS facility for Post Office Savings Bank Account (POSB) Account holders.
This step will make an investment in POSB schemes easier. At present, NEFT is allowed only to Post Office Savings Accounts and this facility will be extended to PPF and SSA accounts soon. IPPB has entered into an arrangement with the Department of Post to allow NEFT/RTGS transactions to their customers in eligible accounts

The World Economic Forum said 100 new startups, including five from India, have joined its Technology Pioneers Community.
The start-ups include entities from healthcare and financial services to the metaverse.  World Economic Forum released the 2022 cohort of Technology Pioneers ahead of its annual meeting in Davos. The five Indian entities include Vahan, SmartCoin Financials, Proeon, Pandocorp, and Recykal.

The theme of World Bee Day 2022 is ‘Bee Engaged: Celebrating the diversity of bees and beekeeping systems’ celebrated on 20 May.

In keeping with the ethos of One Nation, One Portal, Union Minister Dr. Jitendra Singh unveiled the Single National Portal for Biotech Researchers and Start-ups. All those seeking regulatory permission for biological research and development activity in the country will use BioRRAP. According to the Minister, biotechnology has quickly become a viable academic and career option for Indian youth. The country currently has over 2,700 biotech start-ups and over 2,500 biotech enterprises in operation

Union Minister for Minority Affairs Mukhtar Abbas Naqvi inaugurated the country’s first ‘Amrit Sarovar’ in Rampur, Uttar Pradesh.
With the help of local people and local school children, the dirty pond has been transformed with a new retaining wall, boundary wall, food court, fountains, and lighting. Prime Minister Narendra Modi had called for having at least 75 water bodies in every district in the 75th year of India’s Independence