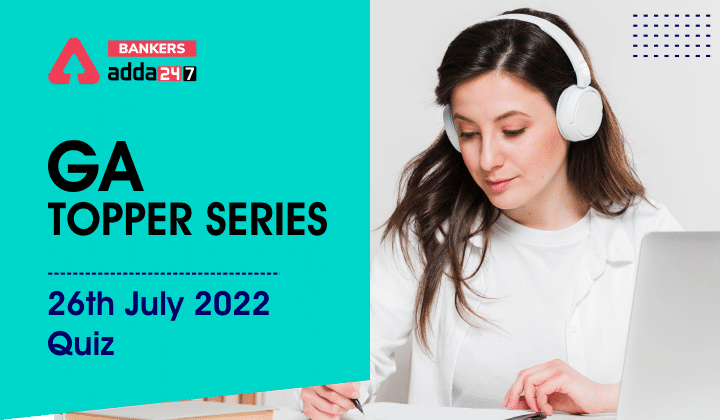 GA Topper Series: 26th July 2022: Hello Students, General Awareness is an essential part of all government exams. Its better to prepare this section daily and revise the same using the factsheet provided. Bankersadda team has brought you up a new series in which we will come up with 10 questions and answers, other options of the question has a related news to it. So don’t miss to read the solutions.

Q1. Match the books with their author

Q2. Which of the following institute will host International Conference on CASM?

(a) CSIR – National Institute for Interdisciplinary Science and Technology

(a)  Ministry of Youth Affairs

Q7. Who has become the official partner with the Indian Olympic Association (IOA) for the upcoming Birmingham Commonwealth Games 2022 in England?

Q9. Who has been appointed as the CEO of Vodafone Idea?

Q10. Who has been appointed as the managing director of TATA projects?

The book is titled “In the Shadow of a Legend: Dilip Kumar” by author Faisal Farooqui

The India Story’ by Bimal Jalan

CSIR-National Institute for Interdisciplinary Science and Technology (CSIR-NIIST), Thiruvananthapuram, will host an International Conference on CASM 2022.

The motto of AIR is ‘Bahujan Hitaya: Bahujan Sukhaya’ and has the purpose of educating, informing and entertaining the masses.

Adani Sportsline, the sports arm of the Adani Group, has become an official partner with the Indian Olympic Association (IOA) for the upcoming Birmingham Commonwealth Games 2022 in England, Hangzhou

National Broadcasting Day is annually celebrated on July 23 in India to commemorate the first radio broadcast aired from the Indian Broadcasting Company (IBC) on 23 July 1927. IBC was a private radio station based in Bombay (now Mumbai), Maharashtra.

Vodafone Idea, a telecom Company, said that Akshay Moondra, who currently serves as chief financial officer, has been promoted to CEO with effect from August 19.

Vinayak Pai has been named as the managing director of TATA Projects, the company announced. In a statement, the business said Vinayak Deshpande had been replaced by Pai.

RattanIndia Power announced hiring Brijesh Gupta as its new managing director. He has experience working across the renewable, steel, mining and commodities sector in India and abroad