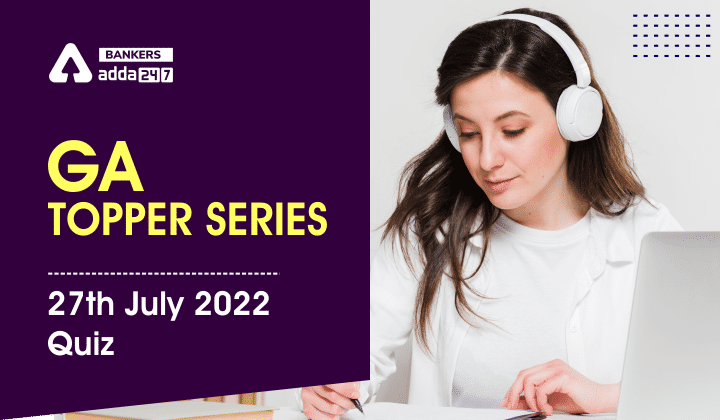 GA Topper Series: 27th July 2022: Hello Students, General Awareness is an essential part of all government exams. Its better to prepare this section daily and revise the same using the factsheet provided. Bankersadda team has brought you up a new series in which we will come up with 10 questions and answers, other options of the question has a related news to it. So don’t miss to read the solutions.

Q1. What is the name of the campaign launched to cheer for Team India in Common wealth Games 2022?

(a) India is best

(b) Create for India

Q2. India gave 2.5 million to United Nations Relief and Works Agency for Palestine Refugees(UNRWA). Where is the headquarters of UNRWA?

Q3. US-India Strategic Partnership Forum (USISPF) has given public service award to former US Defense Secretary General Jim Mattis. In addition to which of the following Indian personality?

Q5. Who is the parent company of Paytm Payments Services Ltd (PPSL)?

Q6. Who among the following Indian umpires in the international elite of Umpires?

Q7. In which year flag code was formulated?

(a) creating awareness of pediatric preventive healthcare through Allopathic intervention

(b) creating awareness of pediatric preventive healthcare through Homeopathic intervention

(d) None of the combinations

Q10. What is the name of the World’s first IVF baby?

The Sports Authority of India (SAI) has started a new initiative to cheer for Team India, under which SAI has launched the campaign “Create for India”

India gave the United Nations Relief and Works Agency for Palestine Refugees in the Near East USD 2.5 million in a signing ceremony at UNRWA headquarters in East Jerusalem.

US-India Strategic Partnership Forum (USISPF) has recognised former Indian Army Chief General Manoj Mukund Naravane for his contribution to fostering ties between India and the US. The public service award has also been given to former US Defense Secretary General Jim Mattis in addition to Naravane. The USISPF gave prizes for public service and global leadership to those who had a significant impact on advancing connections between the US and India

Manoj Pande: Chiefs of Staff Committee and the Army Staff

Startup Incubation and Innovation Centre (SIIC) at IIT Kanpur has launched “NIRMAN” Accelerator Programme, supported by the department of science and technology, the government of India.

In order to implement safety incident detection, metal and oil and gas company Vedanta has partnered with Detect Technologies, a startup established at IIT Madras.

A unique biodiversity sensor project is launched by Syngenta, a global agri-business major. It claimed to be the first such project in India. Syngenta has launched this project in collaboration with the Indian Institute of Technology, Ropar, Punjab (IIT-R).

One97 Communications is parent company

Paytm’s parent One97 Communications has appointed Nakul Jain as the CEO of Paytm Payments Services Ltd (PPSL). Praveen Sharma, who is now serving as the acting CEO of PPSL, has been promoted to oversee the organisation’s commerce vertical in addition to his other duties.

The Board of Control for Cricket in India (BCCI) has introduced a new A+ category for its umpires and Nitin Menon, along with ten other officials, have been grouped in the category. Umpires in A+ and A categories are paid Rs 40,000 a day for a first-class game while Rs 30,000 a day are paid in the B and C category.

The Ministry of Home Affairs (MHA), Government of India (GoI), has amended the Flag Code of India 2002, to allow the tricolour to be displayed in open and on individual houses or buildings throughout the day and night

Bal Raksha mobile app: The app aims at creating awareness of pediatric preventive healthcare through Ayurveda intervention amongst parents. It will also collect feedback from parents regarding the impact of the kit on their children’s health and immunity

World In-Vitro Fertilization ( IVF ) Day is annually observed across the globe on 25th July to commemorate the birth of Louise Joy Brown, the World’s first IVF baby, on 25th July 1978 in Manchester, England