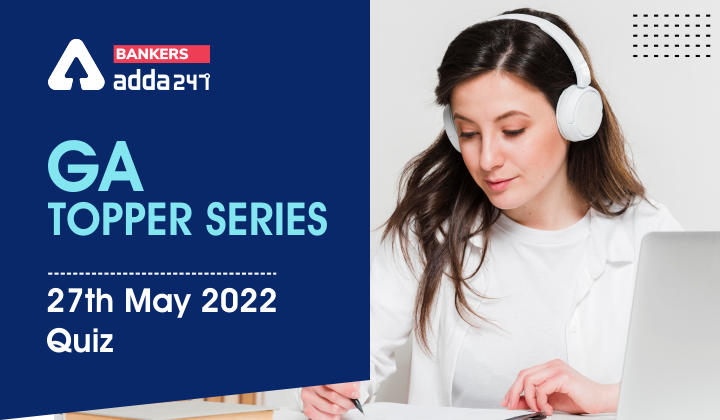 GA Topper Series: 27th May 2022 Quiz: Hello Students, all those students who have cleared their prelims exams in the banking sector must be prepared with every topic in the General Awareness Section for the mains examinations. Bankersadda team has brought you up a new series in which we will come up with 10 questions with the correct answer and the detailed solution to the question.

(b) Waste to wealth

(b) Department of promotion of industry and internal trade

Q3. What is the rank of India in WED’s Travel and Tourism Competitiveness Index 2021 and who topped the index?

Q4. ELSS was allowed to save taxes by SEBI. These schemes are based on the?

Q5. Which PSU got the Rajbhasha shield?

Q6. Tedros Adhanom Ghebreyesus was reappointed as WHO Director-General, he belongs to which country?

Q7. What is the first book of Ruskin Bond?

(a) Listen to your heart: the London Adventure

(b) The room on the roof

(c) A flight of pigeons

Q9. Which state has launched the Olympic values education Programme?

Q10. Which metro city becomes the first to have its own Biodiversity Register?

The Ministry of Housing and Urban Affairs (MoHUA) launched the 8th edition of Swachh Survekshan 2023 under Swachh Bharat Mission Urban 2.0 (SBMU 2.0). It is an annual cleanliness survey with the theme of “Waste to Wealth” for garbage-free cities.

Foreign Investment Facilitation Portal is an online single window portal, responsible for the processing FDI in India. The proposals filed on FIF Portal are forwarded to the concerned administrative ministry and are also simultaneously marked to the Ministry of External Affairs (MEA) and Reserve Bank of India (RBI) for comments and to the Ministry of Home Affairs (MHA) for necessary security clearance, wherever required as per the FDI Policy or Foreign Exchange Management Act (FEMA) Regulations

The World Economic Forum’s (WEF) ranked India 54th position (down from 46th in 2019) with a score of 4.1 in its Travel and Tourism Development Index 2021, but still, India remains the top performer in South Asia. Japan has topped (1) the global chart and the bottom position (117) is occupied by the country Chad. The Theme of the WEF’s Travel and Tourism Development Index 2021 is “Rebuilding for a Sustainable and Resilient Future”.

It’s based on the market capitalization of the top 250 companies. Recently SEBI was allowed to save tax mutual funds under ELSS under IT Act 80- c. ELSS- Equity-linked saving schemes.

Ruskin Bond’s First Book – The Room on the Roof

International Missing Children’s Day is annually observed across the globe on 25th May to create awareness about child abduction and educate the general public on the measures to protect and safeguard their children. The day is widely referred to with a forget-me-not flower as its emblem

India’s First Olympic Values Education Programme Launched in Odisha. It will be implemented in 90 schools across two smart cities Bhubaneswar and Rourkela in the first phase. OVEP was launched in 27 schools in Rourkela and 63 schools in Bhubaneswar.

Kolkata is the first major metro to prepare the PBR. Chandigarh and Indore are other important cities that have prepared the document.