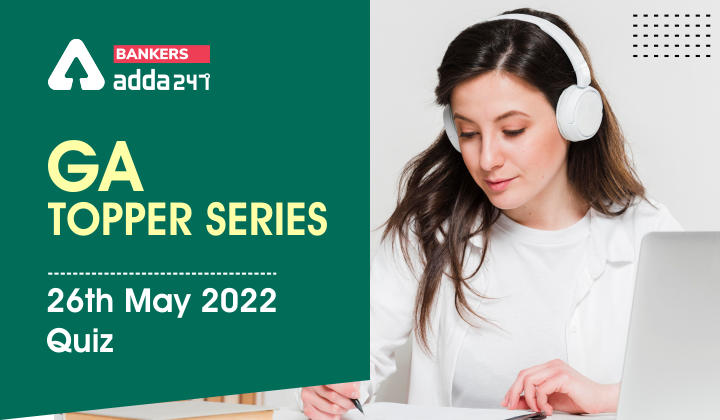 GA Topper Series: 26th May 2022 Quiz: Hello Students, all those students who have cleared their prelims exams in the banking sector must be prepared with every topic in the General Awareness Section for the mains examinations. Bankersadda team has brought you up a new series in which we will come up with 10 questions with the correct answer and the detailed solution to the question.

Q2. Which player became the first player to hit 700 fours in IPL?

Q3. State Bank of India (SBI) has announced the introduction of Real-Time Xpress Credit on its Yono platform, allowing eligible customers to get personal loans of up to how many lakhs?

Q4. What is the rank of the Indian Air Force under the World Airpower Index?

Q5. Who has not been awarded the Sangita Kala Nidhi award?

Q7. RBI has recently formulated a committee for customer service. Which is the first committee in this respect by RBI?

Q8. Which of the following were among TIME magazine’s most influential people?

(d) None of the above

Q10. Where was the fossil of the Madtssoiidae snake found in India?

(b) Jammu and Kashmir

ABHA is 14 digit ID. Recently ABHA was merged with the Arogya setu app.

Punjab Kings opening batter Shikhar Dhawan has become the first player to hit 700 fours in the history of the Indian Premier League (IPL).

State Bank of India (SBI) has announced the introduction of Real-Time Xpress Credit on its Yono platform, allowing eligible customers to get personal loans of up to Rs 35 lakh.

State Bank of India (SBI) has tied up a Memorandum of Understanding (MoU) with the Border Security Force (BSF).

Gautam Adani, Chairman and founder of the Adani Group, Supreme Court lawyer and public activist Karuna Nundy, and Kashmiri rights activist Khurram Parvez were among the list of 100 Most Influential People of 2022 published by TIME magazine, an American news magazine

Author and journalist, Wesley Morgan has won the William E. Colby Award 2022 for his military and intelligence writing. He was cited for his book “The Hardest Place: The American Military Adrift in Afghanistan’s Pech Valley.” The Colby Award, a $5,000 prize named for the former ambassador and CIA director William E. Colby, is given for “a major contribution to the understanding of military history, intelligence operations or international affairs.” The Colby Award is presented by Norwich University in Northfield, Vermont. The Colby award was established in 1999.

Scientists have discovered the fossil of a Madtsoiidae snake in the Himalayan Mountains in Ladakh. Madtsoiidae is an extinct group of medium-sized to gigantic snakes.
This research highlights the existence of the rare serpent species in the Indian subcontinent. They are thought to grow up to 30 feet in length. The study was undertaken by researchers from Wadia Institute of Himalayan Geology, Dehradun, Panjab University, IIT Ropar, and Comenius University, Slovakia

Note: The reason to write the answers, in the end, is to make you try the questions and you can see how much you know. The second reason is that solution screenshots can be taken for future notes revision.