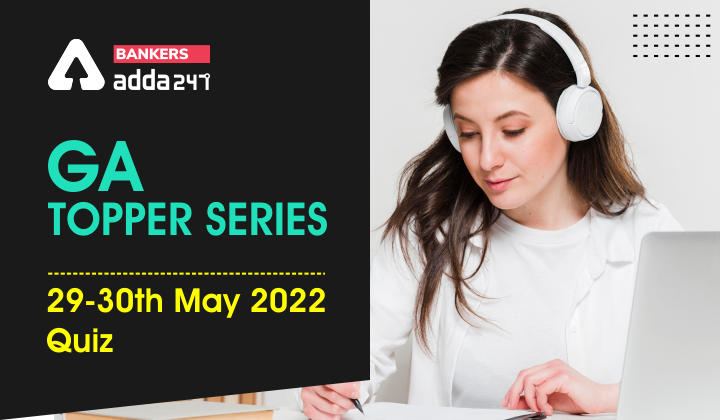 GA Topper Series: 29th-30th May 2022 Quiz: Hello Students, all those students who have cleared their prelims exams in the banking sector must be prepared with every topic in the General Awareness Section for the mains examinations. Bankersadda team has brought you up a new series in which we will come up with 10 questions with the correct answer and the detailed solution to the question.

Q1. When Lokpal and Lokayukta act was passed? What is the maximum age of the Lokpal chief?

(a) Decision to leave

(b) Triangle of sadness

Q3. Where Global Organic Expo is held and which edition it was?

Q4. Which of the river waters can be used for hydroelectric power energy without any restriction by India according to the Indus water treaty?

Q5. Who has started Suposhit Maa Abhiyan and where?

Q6. During the recent QUAD summit, many initiatives were launched. Choose which of the initiatives are correctly matched in the statements.

Q7. Who was the representative of India at the International Migration Review Forum 2022?

Q8. Who has launched Loan Against Shares- LAS  scheme?

Q9. Who has won the International Booker Prize For Translated Fiction?

Q10. Which Subsidiary of Coal India Ltd is set to be divested by CIL up to 25% of the paid-up share?

The Lokpal and Lokayuktas Act, which envisages the appointment of a Lokpal at the Centre and Lokayuktas in states to look into cases of corruption against certain categories of public servants, was passed in 2013.

3rd Global Organic Expo 2022 is poised to be a major platform for Organic Producers, Aggregators, Processors, Value Chain Integrators, and the Industry Partners by offering Global level conference, with an apt theme “Profitability for Humanity” in Delhi

Indus Water Treaty (IWT) is a water-distribution treaty between India and Pakistan in 1960 to use the water available in the Indus River and its tributaries. The treaty sets out a mechanism for cooperation and information exchange between the two countries regarding their use of six rivers: Beas, Ravi, Sutlej, Indus, Chenab, and Jhelum. Sutlej, Beas, and Ravi have unrestricted usage.

Lok Sabha (LS) Speaker Om Birla launched the second phase of “Suposhit Maa Abhiyan” in Kota, Rajasthan. Under the campaign, 3000 women will be provided with the nutrition kits for 9 months with the help of public support and a monthly health checkup. In 2020, the scheme was first started by identifying 1000 women in the Kota Bundi parliamentary constituency to overcome the nutritional deficiency among women.

Quad Climate Change Adaptation and Mitigation Package (QCHAMP) with ‘mitigation’ and ‘adaptation’ as its two themes.

‘Quad Fellowship program’ will be offered by the Quad to students from four countries. It is a philanthropic initiative led by the Schmidt Futures to annually provide 25 students from each Quad country with financial support to do their master’s and doctoral degrees at Science, Technology, Engineering, and Mathematics (STEM) universities in the US.

The International Migration Review Forum 2022 acts as the primary intergovernmental global platform for discussing and sharing progress on all aspects of migration and their convergence with the Sustainable Development Goals (SDGs).

Tata Capital Limited has launched “Loan Against Shares – LAS”, an end-to-end integrated digital financing offering. Under LAS, Customers can avail of loans up to Rs 5 crores by pledging their dematerialized shares online, facilitated by NSDL (National Securities Depository Limited). The loan amount is customized based on the value of shares in the portfolio of the customer.

The 2022 International Booker Prize for Translated Fiction was awarded to ‘Tomb of Sand’ written by Geetanjali Shree and translated by Daisy Rockwell. The book was originally published in Hindi as Ret Samadhi in 2018. The award was presented by Booker Prize Foundation

Coal India Ltd (CIL), under the Ministry of Coal(MoC), is set to divest the 25% paid-up share principle of its unlisted subsidiary, Bharat Coking Coal Ltd (BCCL), and its subsequent listing on stock exchanges after getting further clearance