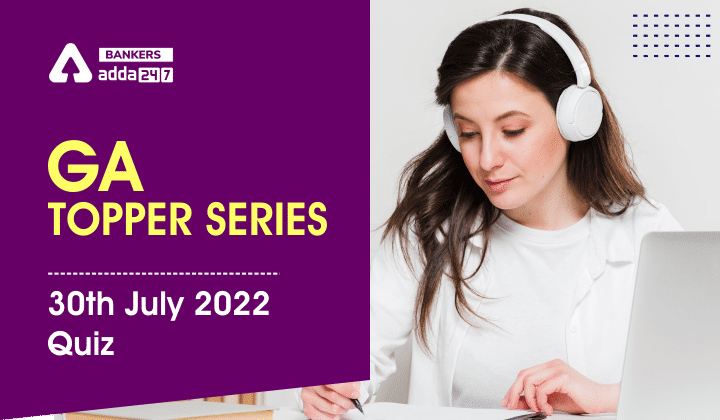 GA Topper Series: 30th July 2022: Hello Students, General Awareness is an essential part of all government exams. It’s better to prepare this section daily and revise the same using the factsheet provided. Bankersadda team has brought you up a new series in which we will come up with 10 questions and answers, other options of the question have related news to them. So don’t miss reading the solutions.

Q1. Which among the following F1 Champion announced his retirement in July?

Q2. Sakurajima Volcanic eruptiontook place in which island of Japan?

Q3. Which Indian company signed an MoU with Egypt  to construct a green hydrogen factory in the Suez Canal Economic Zone

Q4. MH-60 R multipurpose helicopter are of which country?

Q5. Kerela Savari is a online service for which of the following services ?

Q7. Which PSB has formulated RACE as its strategy of getting among top 3 PSBs?

Q8. Indian navy designed the aircraft carrier , But it was built by which of the following?

Q9. Seminar on Safe Use of Chemicals at Workplace: seminar was organised by the Department of Chemicals and Petrochemicals (DCPC) with which of the following international organization?

Four-time Formula One champion, Sebastian Vettel who is currently a part of Aston Martin announced his retirement

Other mountains of Japan

Egypt and an Indian company have signed a memorandum of understanding (MoU) to construct a green hydrogen factory in the Suez Canal Economic Zone, according to a cabinet announcement. The MoU states that Indian ReNew Power Private Limited (RENE.BO) will invest $8 billion to construct a facility that will create 20,000 tonnes of green hydrogen annually

At Cochin International Airport, the American Navy delivered two MH-60 R multipurpose helicopters to the Indian Navy. All 24 MH 60R helicopters will be delivered by the end of 2025.

Kerala government is all set to come up with an alternative to the popular corporate online cab service by launching its own e-taxi named ‘Kerala Savari’,  This is for the first time that a state government is launching an online taxi service in the country.

The indigenous aircraft carrier Vikrant, which was created by the Navy’s own Directorate of Naval Design and will likely be commissioned on Independence Day, was delivered to the Navy by the Cochin Shipyard

Seminar on Safe Use of Chemicals at Workplace: The seminar was organised by the Department of Chemicals and Petrochemicals (DCPC) and the International Labour Organisation (ILO).

The ICSCs are data sheets developed by the World Health Organisation (WHO) and the ILO with the cooperation of the European Commission which provides essential safety and health information on chemicals concisely. Until now, around 1784 ICSCs were available for industry workers