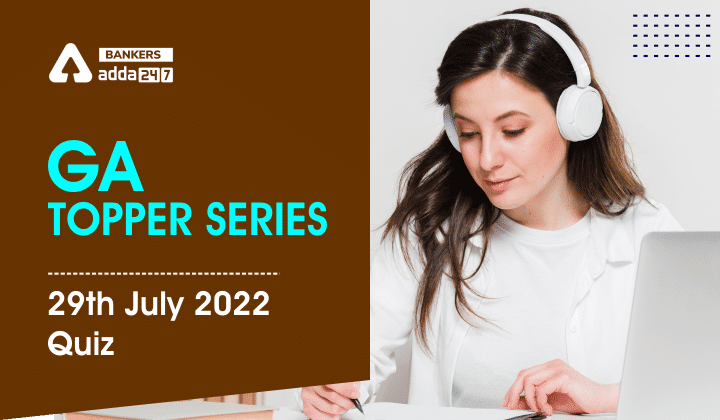 GA Topper Series: 29th July 2022: Hello Students, General Awareness is an essential part of all government exams. It’s better to prepare this section daily and revise the same using the factsheet provided. Bankersadda team has brought you up a new series in which we will come up with 10 questions and answers, other options of the question have related news to them. So don’t miss reading the solutions.

Q1. In which state a first all-women-run financial institution in the cooperative sector is going to establish ?

Q2.  Which of the following is a Noble Peace Prize winner who recently passed away?

Q3. How many tigers in India persished in the past 3 years ?

Q4. With whom iDEX inked its 100th contract?

Q5.What rank did India got in world Atheletics Championship?

Q6.  Who is going to acquire Citibank and Citicorp Finance (India) Limited?

Q7. Which of the following pairs of book and their synopsis are correct?

Q8. Smart E-Beat’ system for police attendance and real-time monitoring of patrolling by personnel will be used by which state?

Q9. How much percent can be owned by non-financial institutions and unregulated entities in IDBI BANk after RBI decision?

Q10. HCL Technologies’ Chairperson, Roshni Nadar Malhotra has retained her position as the richest woman in India, for the 2nd  year in a row according to the third edition of ‘Kotak Private Banking Hurun – Leading Wealthy Women List’. Who is the 2nd rank holder on the list ?

The first all-women-run financial institution in the cooperative sector is coming soon in Rajasthan following a MoU has signed with the Telangana government’s Stree Nidhi.

Kerala government has made the decision to start initiatives to promote full digital literacy in the State.

Burhanpur district of Madhya Pradesh, popularly known as the ‘Darwaza of Dakhin’, became the first Certified ‘Har Ghar Jal’ district in the Country

Oscar-nominated director Bob Rafelson passes away. Bob Rafelson, co-creator of ‘The Monkees’ and Director of the film ‘Five Easy Pieces’ has passed away

Veteran Assamese litterateur and winner of the Sahitya Akademi Award, Atulananda Goswami, has passed away.

329 tigers in India perished in the past three years as a result of poaching, natural disasters, and other factors. The poaching, electrocution, poisoning, and train accidents contributed to the deaths of up to 307 elephants over this time. 96 tigers perished in 2019, 106 in 2020, and 127 in 2021, according to data presented by Union Minister of State for Environment Ashwini Kumar Choubey.

iDEX inked its 100th contract with Pacify Medical Technologies Pvt Ltd in New Delhi. The initiative iDEX (Innovations for Defence Excellence), described as the Ministry of Defence’s (MoD) centrepiece for technical innovation, was introduced by Prime Minister Narendra Modi in April 2018. The purpose of iDEX was to support start-ups by giving them a venue for co-creation and co-development in the fields of defence and aerospace technologies

World Athletics Championships were held in America for the first time. And in terms of medals, Team USA made the most of their time over the last 10 days.

World Athletics Championships were held in America for the first time. And in terms of medals, Team USA made the most of their time over the last 10 days. India came up at number 33 overall and fourth in Asia, just behind China, Japan, and Kazakhstan. More than three times as many as any other nation in the competition, and more than any other nation has ever won at a global championship, the United States finished the competition with a total of 33 medals. This includes 13 golds, the most of any nation.

Acquisition of Citibank, N.A. and Citicorp Finance (India) Limited’s consumer banking operations by Axis Bank has been approved, according to the Competition Commission of India.

HCL Technologies’ Chairperson, Roshni Nadar Malhotra has retained her position as the richest woman in India, for the second year in a row according to the third edition of ‘Kotak Private Banking Hurun – Leading Wealthy Women List’. The total net worth of Roshni Nadar stood at Rs 84,330 crore. Roshni Nadar was followed by Nykaa-owner Falguni Nayar, overtaking Kiran Mazumdar-Shaw of Biocon, with a total wealth of Rs 57,520 crore. Falguni Nayar is the world’s tenth richest self-made woman.