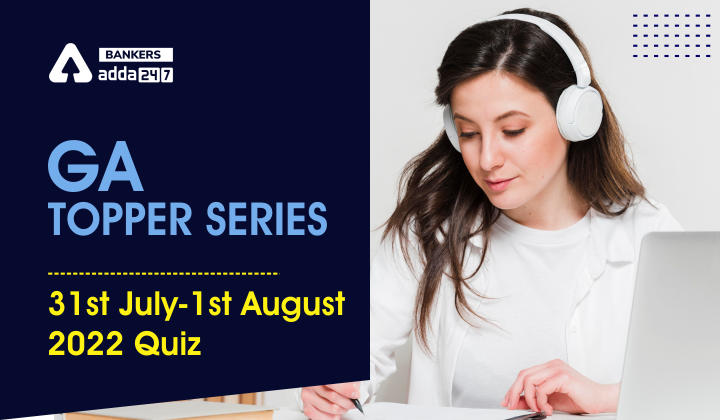 GA Topper Series: 31st July- 1st August 2022: Hello Students, General Awareness is an essential part of all government exams. It’s better to prepare this section daily and revise the same using the factsheet provided. Bankersadda team has brought you up a new series in which we will come up with 10 questions and answers, other options of the question have related news to them. So don’t miss reading the solutions.

Q3. With which country India signed a deal to support palm oil business in July?

Q4. Who has been signed by Coca Cola for its promotion?

Q5. Mukhyamantri Mahtari Nyay Rath Yatra is meant to educate whom about their constitutional rights and laws in Chhatisgarh?

Q6. Which FMCG company topped for being the most popular brand ?

Q7-9 based on agriculture census

Q7. The Agricultural Census is conducted in the interval of how many years in India?

Q8. When was first Agriculture census was conducted ?

Ashok Gautam will head IIBX as MD and CEO. He took charge in February 2022 and worked with IDBI Bank before this. He has earlier worked with the State Bank of India (SBI).

Pranay Kumar Verma, an experienced diplomat and IFS official from the 1994 batch, has been chosen to serve as India’s next High Commissioner to Bangladesh.

World Bank has appointed Indermit Gill, as its chief economist and senior vice-president for development economics at the multilateral development bank.

Ennarasu Karunesan has been named as the IAPH official representative in India. IAPH is the world’s port industry’s forum for cooperation and excellence.

To educate the state’s women about their constitutional rights and laws, the Chhattisgarh Women Commission will host the Mukhyamantri Mahtari Nyay Rath Yatra.

Biscuit brand Parle continued to be the most popular brand among fast-moving consumer goods in India in 2021, topping the rankings for the eleventh year in a row.

The Eleventh Agricultural Census (2021-22) was recently launched by the Union Minister for Agriculture and Farmers Welfare, Narendra Singh Tomar.
Agriculture Census is conducted every 5 years in India and this is the first time the data collection will be conducted on smart phones and tablets. Agricultural Census is the main source of information on the number and area of ​​operational holdings, their size, class-wise distribution, land use, tenancy and cropping pattern, etc

Under this exercise, centre government provides funds to states to do entire work.

Agriculture Census is being conducted in India, on the basis of guidelines of decennial World Census of Agriculture (WCA) that has formulated by Food and Agriculture Organization (FAO) of United Nations. In the census, operational holding is considered as statistical unit at micro-level to collect data. Periodic Agriculture Census provides information regarding the basic characteristics of operational holdings like cropping pattern, land-use, tenancy, irrigation status, and dispersal of holdings etc. The Agriculture Census Scheme was converted to Central Sector Scheme, from a Centrally-Sponsored Scheme, in 2007-08. Thus, central government provides 100 percent financial assistance to States or UTs for payment of salaries, honoraria, office expenses, and printing of schedules, etc.