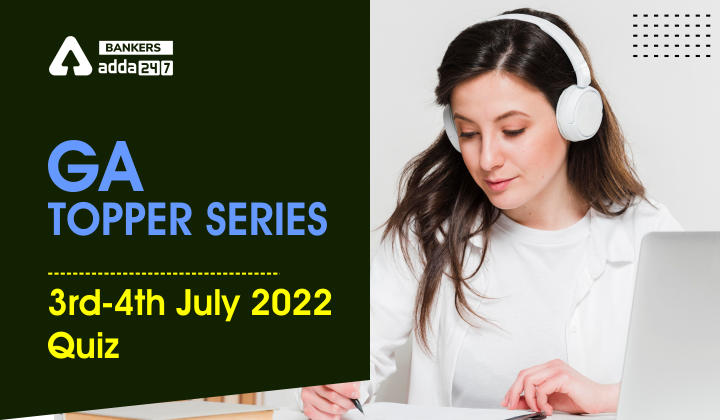 GA Topper Series: 3rd-4th July 2022 Quiz: Hello Students, all those students who have cleared their prelims exams in the banking sector must be prepared with every topic in the General Awareness Section for the mains examinations. Bankersadda team has brought you up a new series in which we will come up with 10 questions with the correct answer and the detailed solution to the question.

Which of the following statements is/ are incorrect?

Q2. Who has been appointed as president of FATF?

Q3. Naari ko naman scheme has been launched by ?

Q4. Who has been replaced by Bill Ready as he becomes CEO of Pinterest Inc?

Q5. According to the QS Best Student Cities Ranking 2023, which Indian city topped?

Q6. Which of the following institutes has launched the Project Surya initiative?

Q7. A new smart campus of which company was inaugurated by Narendra Modi in Bengaluru?

Q9. What is the gross non-performing asset ratio in march 2021 according to the FSR report of RBI?

Prime Minister Narendra Modi will inaugurate Digital India Week 2022 in Gandhinagar in Gujarat. During the program, he will launch multiple digital initiatives aimed at enhancing the accessibility of technology, streamlining service delivery to ensure ease of living, and giving a boost to startups. The theme for Digital India Week is Catalyzing New India’s Techade.

Prime Minister will also launch ‘Digital India GENESIS’ – a National Deep-tech Startup Platform, to discover, support, grow and make successful startups in Tier-II and Tier-III cities of India.  A total outlay of 750 crore rupees has been envisaged for the scheme.

Every option has been a new appointment.

Attorney General (A-G), K.K. Venugopal has been re-appointed as the country’s top law officer for a period of three months

Mukesh Ambani’s eldest son Akash Ambani will take over as chairman of Jio Infocomm’s board, the digital division of Reliance industries

Kerala state government has issued orders regarding the implementation of a medical insurance “MEDISEP” scheme.

Pinterest Inc. announced that Chief Executive Officer (CEO) Ben Silbermann will step down from his position and will be replaced by Bill Ready, Google Executive

According to the QS Best Student Cities Ranking 2023, released by global higher education consultancy Quacquarelli Symonds(QS), Mumbai ranked at 103 has emerged as India’s highest-ranked student city. The other Indian cities in the rankings include Bengaluru (114), Chennai (125), and New Delhi (129).

The new smart campus of Bosch India, a top provider of technology and services in Bengaluru, was essentially inaugurated by Prime Minister Narendra Modi. According to a business statement, Modi noted in his inauguration address that this year is a historic one for both India and Bosch India as both countries mark their 75th anniversaries of independence.

The 2022 NATO Madrid Summit was held in Madrid, Spain. This was the 32nd edition of the summit since the first summit meeting was held in Paris in 1957. The Summit was chaired by NATO Secretary-General Jens Stoltenberg. The heads of state and heads of government of NATO member and partner countries participated in the three-day Summit.

In March 2022, banks’ gross non-performing asset (GNPA) ratio decreased to a six-year low of 5.9 percent from a high of 7.4 percent in March 2021, according to the Reserve Bank of India’s (RBI) most recent Financial Stability Report (FSR).