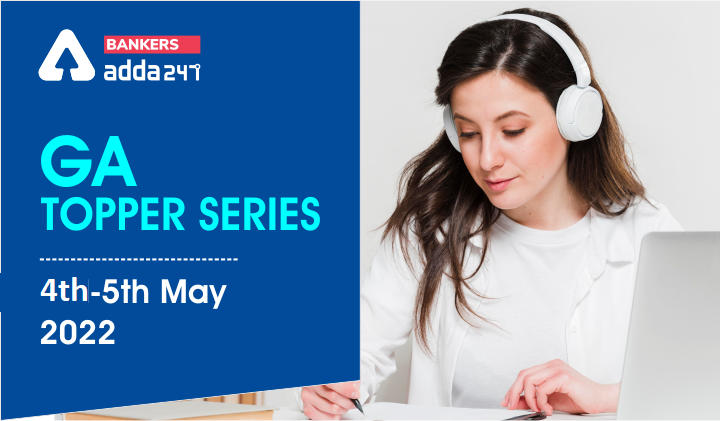 GA Topper Series: 4th-5th May 2022: Hello Students, all those students who have cleared their prelims exams in the banking sector must be prepared with every topic in the General Awareness Section for the mains examinations. Bankersadda team has brought you up a new series in which we will come up with 10 questions with the correct answer and the detailed solution to the question.

Q1. What are the names of the indigenously built microprocessors of India?

Developed by CDAC and IIT Madras- Shakti and Vega are the names of microprocessors.

Food and Agriculture Organization of the United Nations (FAO) released its flagship publication “The State of the World’s Forests (SOFO) 2022: Forest Pathways for Green Recovery and Building Inclusive, Resilient and Sustainable economies

Q3. Where is the station named “ Mahesh Nagar halt “ located?

Q4. India gets its 100th unicorn startup, what is the name of the unicorn?

Q5. The Times Higher Education (THE) released THE Impact Rankings 2022 (4th edition) was released recently. Which Indian institution got a rank in the top 50?

Amrita Vishwa Vidyapeetham, Coimbatore, Tamil Nadu has secured 41st Rank in THE Impact Rankings 2022, the only Indian University among the top 50

Q6. What is the name of the first film directed by Satyajit Ray?

(a) The Apu trilogy

All the films are directed by Satyajit ray. The first film was pather Panchali. On his 101 birth anniversary, there was a special screening of the “ Pather Panchali” movie.

Q8. The first statue in North America of Sardar Vallabh Bhai Patel was inaugurated in which city and country?

The inauguration of a statue of Sardar Vallabhbhai Patel, the first in North America, in Canada was praised by Prime Minister Narendra Modi as “a benchmark for relations between the two countries.” The bronze monument was unveiled at a ceremony at the Sanatan Mandir Cultural Centre in Markham, Ontario

Q9. Kamladevi Chattopadhyay after whom Indian Coast Guard named the Fast Patrol Vessel was related to which field?

RBI approved the nomination of Dr. Rajiv Ranjan, Executive Director of RBI as an ex-officio member of the Monetary Policy Committee(MPC). He replaces Mridul Saggar.