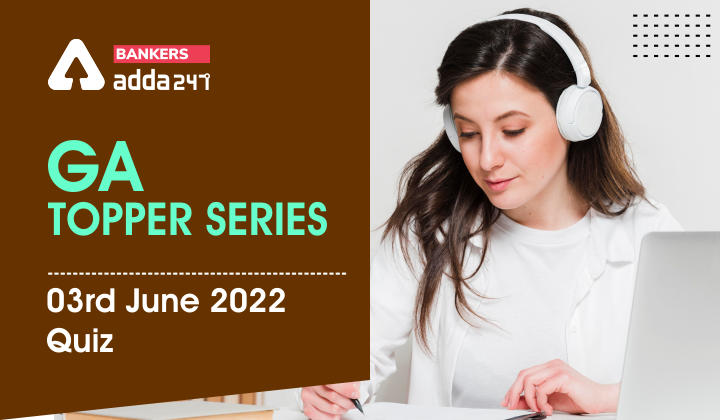 GA Topper Series: 3rd June 2022 Quiz:  Hello Students, all those students who have cleared their prelims exams in the banking sector must be prepared with every topic in the General Awareness Section for the mains examinations. Bankersadda team has brought you up a new series in which we will come up with 10 questions with the correct answer and the detailed solution to the question.

Q1. Consider the following statements about the top 500 list of supercomputers

Q3. Where Lavender festival is organized in India?

Q4. Which country became the first country to adopt bitcoin as the legal tender?

Q5. Under which act does National Assets Reconstruction Company Ltd (NARCL) been established?

Q6. What is the name of the autobiography of Sachin Tendulkar?

(b) Playing it my way

(d) Chase Your Dreams: My Autobiography

Q7. Which state / Ut has inaugurated the project: Nigah?

Q9. Who is the implementation agency of Pradhan Mantri Bhartiya Janaushadhi Pariyojana and in which year its launched?

(a) Bureau of Pharma PSUs of India

(b) Ministry of health and family welfare

India’s First Lavender Festival in the Bhaderwah town in Doda district of Jammu Division of the Indian union territory of Jammu and Kashmir(J&K).

Another festival of Jammu Kashmir

Playing it my way and Chase your dreams are books by Sachin Tendulkar.

The test of my life: Yuvraj Singh

A liquid mirror telescope built by astronomers from India, Belgium, and Canada, the novel instrument employs a 4-meter-diameter rotating mirror made up of a thin film of liquid mercury to collect and focus light. It is located at an altitude of 2450 metres at the Devasthal Observatory campus of Aryabhatta Research Institute of Observational Sciences (ARIES), an autonomous institute under the Department of Science and Technology (DST), Govt. of India in Nainital district, Uttarakhand.

Jan Aushadhi stores surpassed Rs 100 crore for the first time. The Pradhan Mantri Bhartiya Janaushadhi Pariyojana (PMBJP) is been implemented by the PMBI. Another name is the Bureau of Pharma PSUs of India (BPPI)

Pradhan Mantri Bhartiya Janaushadhi Pariyojana (PMBJP) is a campaign launched by the Department of Pharmaceuticals in 2008 under the name Jan Aushadi Campaign.

The Bureau of Pharma PSUs of India works under the Ministry of Chemicals & Fertilizers.

Director of Ruchi Foodline, Eastern India’s leading food brand and Odisha’s No.1 spices company, Rashmi Sahoo has been presented the Times Business Award 2022. She was given the award by renowned Bollywood actor and social activist Sonu Sood. The award was given in the category of Eastern India’s Leading READY -TO-EAT brand