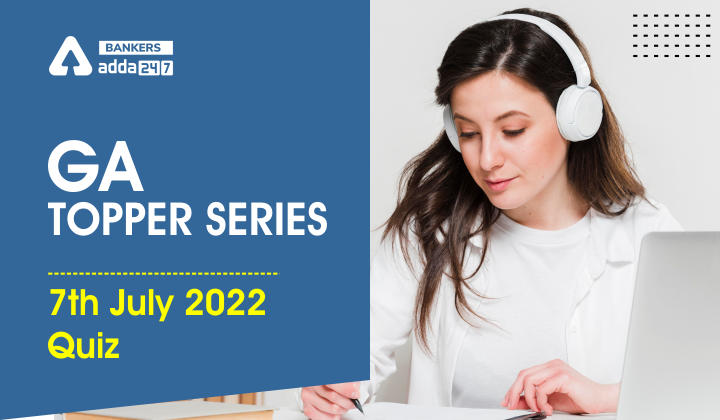 GA Topper Series: 7th July 2022 Quiz: Hello Students, all those students who have cleared their prelims exams in the banking sector must be prepared with every topic in the General Awareness Section for the mains examinations. Bankersadda team has brought you up a new series in which we will come up with 10 questions with the correct answer and the detailed solution to the question.

Q1. Department of Telecommunications (DoT), Ministry of Communications has signed an agreement with which telecom company to fund pilot projects under the Universal Service Obligation Fund (USOF)?

Q4. What is the name of the portal to integrate all CBSE Board Exam Activities?

Q5. Which country has launched the Zuljanah rocket?

Q6. A new book titled “Ganga: ReImagining, ReJuvenating, ReConnecting” describes the issues faced by which of the following projects?

(b) National Mission for clean ganga

Q8. Maryna Viazovska, who won the top mathematics prize, the Fields Medal 2022, belongs to which country?

Q9. Agradoot is a newspaper in which language?

Q10. What is the green deal by Europe for?

(b) to finance 100 billion in sustainable projects

The Universal Service Support Policy came into effect on 01.04.2002. The guidelines for universal service support policy were issued by DoT on 27th March 2002. The Indian Telegraph (Amendment) Act, 2003 giving statutory status to the Universal Service Obligation Fund (USOF) was passed by both Houses of Parliament in December 2003.

The Securities and Exchange Board of India (SEBI), the capital markets regulator, has extended the deadline for implementation of the guidelines, related to the Demat Debit and Pledge Instruction (DDPI) for pledging and repledging of stocks for margin purposes, by 2 months, from its original date of July 01, 2022, to September 01, 2022.

CBSE launches ‘Pariksha Sangam’ Portal to Integrate all CBSE Board Exam Activities The Central Board of Secondary Education(CBSE) launched a digital portal named ‘Pariksha Sangam’ to streamline all CBSE board exams and result-related activities for classes 10th and 12th.

Rajiv Ranjan Mishra and Puskal Upadhyay have authored a new book titled “Ganga: ReImagining, ReJuvenating, ReConnecting” which describes the issues faced by the National Mission for Clean Ganga (NMCG) team during its task.

International Plastic Bag Free Day, is celebrated annually on July 3 at the global level to spread awareness about the harmful effects of plastic and ways to eliminate the use of plastic bags

Ukrainian maths professor, Maryna Viazovska, who won the top mathematics prize, the Fields Medal 2022. Viazovska and three other mathematicians received the Fields Medal, dubbed the Nobel prize in maths, in Helsinki after the ceremony was moved from Saint Petersburg to the Finnish capital in response to Moscow’s war.

Prime Minister Narendra Modi will inaugurate the Golden Jubilee Celebrations of the Agradoot group of newspapers.
‘Agradoot’ was started as an Assamese bi-weekly. It was established by Kanak Sen Deka, a senior journalist of Assam. In 1995, a daily newspaper Dainik Agradoot was started and it has developed as a trusted and influential voice of Assam.

Green Deal: pioneering proposals to restore Europe’s nature by 2050 and 50 % pesticide use by 2030 The European Commission has adopted pioneering proposals to restore damaged ecosystems and bring nature back across Europe, from agricultural land and seas to forests and urban environments. The Commission also proposes to reduce the use and risk of chemical pesticides by 50% by 2030.  The proposal for a Nature Restoration Law to repair the 80% of European habitats which are in poor condition, and to bring back nature to all ecosystems. The aim is to cover at least 20% of the EU’s land and sea areas by 2030 with nature restoration measures, and eventually extend these to all ecosystems in need of restoration by 2050