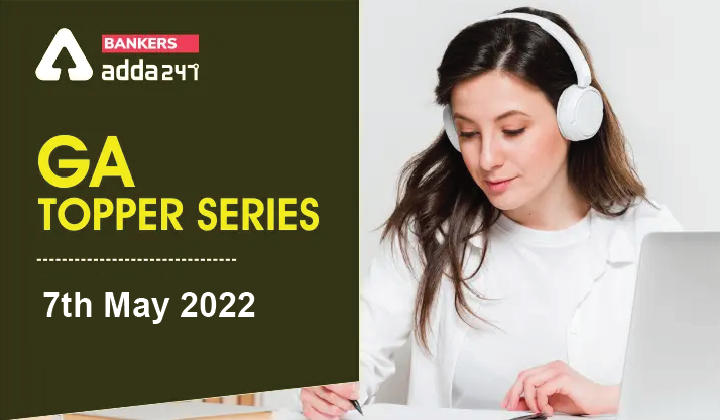 GA Topper Series: 7th May 2022: Hello Students, all those students who have cleared their prelims exams in the banking sector must be prepared with every topic in the General Awareness Section for the mains examinations. Bankersadda team has brought you up a new series in which we will come up with 10 questions with the correct answer and the detailed solution to the question.

(a) Food and Agriculture Organization

Worldwide fund for nature is not involved in this report

GRFC is jointly produced by the Food and Agriculture Organization(FAO) of the United Nations (UN), the World Food Programme (WFP), and the European Union (EU).

Q2. Shukrayan –I am on a mission on which planet and by which country?

The Indian Space Research Organisation will send a spacecraft to orbit Venus to study what lies below its surface, by December 2024

Q3. Which state has launched an app to track vehicles carrying sand and other mining material?

Other news related to Haryana:

Q4. the following persons died recently. Match them with their professions.

Tony Brooks, a British racing driver who won six Formula One Grand Prix in the 1950s and was nicknamed the “Racing Dentist”, has passed away. Film and TV actor Salim Ghouse passed away in Mumbai after suffering a cardiac arrest. The Former Chief Minister of Meghalaya, James Dringwell Rymbai, died at the age of 88.

Q6. Recently a world food prize was given. Name the person who got this award for the first time in 1987?

MS Swaminathan was the first person to get this award Norman Borlaug formulated this award. Cynthia Rosenzweig got the award recently for 2021.

After Pandemic India has signed a Comprehensive Economic Partnership Agreement with UAE which came into force on 1 may 2022. India has given a 1 billion $ line of credit to Srilanka.

Q8 “Health cloud” inaugurated at Vishakhapatnam is developed by which Indian organization for what purpose?

(c) DMRC, for quick medical help for the army

The Board of Control for Cricket in India (BCCI) has banned journalist Boria Majumdar for two years after an internal inquiry found him guilty of an attempt to “threaten and intimidate” in the Wriddhiman Saha case.

The government of Odisha has set up India’s first Tribal Health Observatory (TriHOb), which acts as a repository of health-related data of the tribal populations in Odisha. Other schemes/ developments of Odisha are Kalia Yojana, Mo Sarkar, the REWARD Programme of the world bank, and World Food Programme (WFP) have partnered to improve household food and nutritional security to empower SHGs.