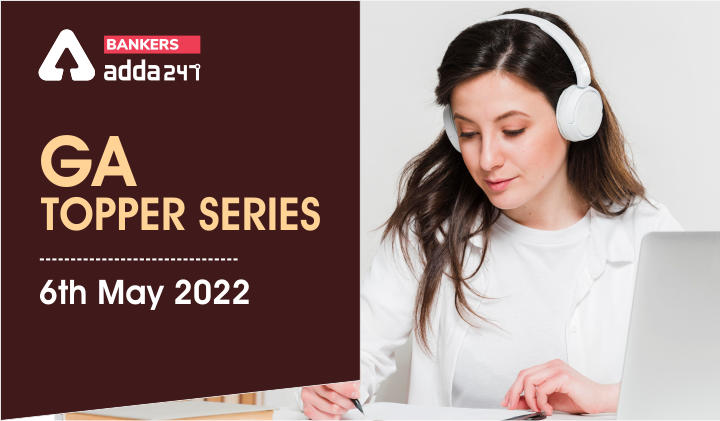 GA Topper Series: 6th May 2022: Hello Students, all those students who have cleared their prelims exams in the banking sector must be prepared with every topic in the General Awareness Section for the mains examinations. Bankersadda team has brought you up a new series in which we will come up with 10 questions with the correct answer and the detailed solution to the question.

Q1. Which state of India is to reach 10 GW of cumulative large-scale solar installation?

Q2. Who among the following is appointed as the Chief Technology officer of the Central Intelligence Agency?

Indian-Origin, Nand Mulchandani has been appointed as the first-ever Chief Technology Officer (CTO) of the Central Intelligence Agency.

Q3. Match the players with their respective sports

In recent news, Ronnie O’Sullivan (England) has won the 2022 World Snooker Championship by defeating Judd Trump (England) 18-13 in the finals. Harshada Sharad Garud made history by being the first Indian woman to win a gold medal at the IWF Junior World Championships in Heraklion, Greece. Manika Batra got 38th position in the world ranking of table tennis.

Q4. Which of the following statements is correct with respect to the Khelo India University games 2021 held in Bengaluru?

Jain (Deemed-to-be University) with 20 gold, 7 silver and 5 bronze medals has won the 2nd edition of the Khelo India University Games 2022. The Games introduced indigenous sporting competitions such as Yogasana and Mallakhamba for the first time in the history of national sports. Siva Sridhar has emerged as the star swimmer by winning 11 gold

Q6. Which country got the first and the last rank in the world freedom index in which India got the 150th rank?

India’s ranking in the Index has fallen down to 150th position from last year’s 142nd rank.

Norway (1st) Denmark (2nd), Sweden (3rd) Estonia (4th) and Finland (5th) grabbed the top positions, while North Korea remained at the bottom of the list of the 180 countries and territories.

(a) A neo-bank is a type of digital bank that does not have any physical locations.

A neo-bank is a type of digital bank that does not have any physical locations. They use artificial intelligence and technology to provide personalized services to clients while lowering operating expenses

Q8. Which state of north east launched the online building permission system in may?

Q9. Which company among the following is not related to Jeff Bezos?

Altos Labs, Blue origin are founded by Jeff Bezos whereas the Washington Post was bought by Jeff Bezos. Starlink is an entity owned by Elon Musk. Recently, Andy Jassy will be taking over amazon as CEO after Jeff Bezos stepped down from the position.

Q10. Which country will be the official Country of Honour at the upcoming Marche’ Du Film?