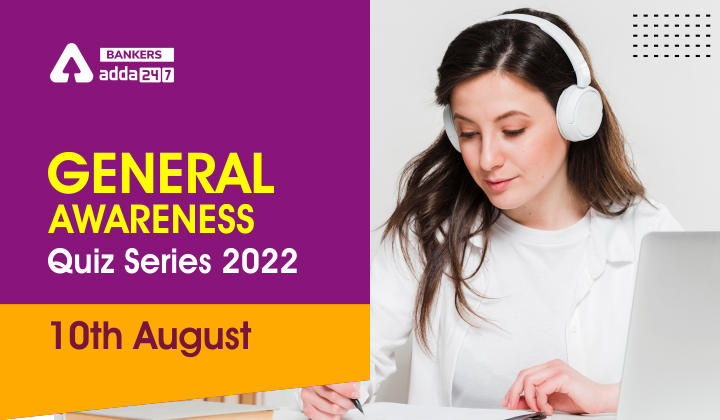 General Awareness Quiz Series 2022: 10th August: Hello Students, General Awareness is an essential part of all government exams. It’s better to prepare this section daily and revise the same using the factsheet provided. Bankersadda team has brought you up a new series in which we will come up with 10 questions and answers, other options of the question have related news to them. So don’t miss reading the solutions.

Q1. World Lion Day is observed globally on which day which coincides with World Biofuel Day?

Q3. A pan-India satellite communication exercise named ‘Ex Skylight was conducted by whom?

Q4. Which state introduced the Constitution (Amendment) Bill, 2022 for insertion of a new article 3A?

Q5. Who is the title sponsor for all international and domestic cricket matches organised by the Board of Control for Cricket in India (BCCI)?

Q8. Which of the following exercise is not US –India exercise?

Q10. The world’s highest railway bridge is located in which Indian state/UT?

World Biofuel Day is commemorated on 10 August every year to raise awareness about the use of non-fossil fuels as an alternative to conventional fossil fuels.

World Lion Day is observed globally on 10th August. The day aims to spread awareness of lions and the urgent need to strive toward their conservation.

Google has launched ‘India Ki Udaan’ to mark 75 years of Independence. The project has executed by Google Arts & Culture celebrates the country’s achievements and is “themed on the unwavering and undying spirit of India over these past 75 years”

A Rajya Sabha M.P of YSRCP introduced the Constitution (Amendment) Bill, 2022 for insertion of new article 3A.
It seeks to provide state legislatures with explicit legislative competence to establish one or more capitals within their territory. The state government had plans to develop three capitals for Andhra Pradesh

Mastercard is set to replace Paytm as the title sponsor for all international and domestic cricket matches organised by the Board of Control for Cricket in India (BCCI).

Government of Telangana has introduced the “Nethanna Ku Bima” Scheme, which offers insurance coverage to handloom and powerloom weavers in the State

Published by Rupa Publications India, ‘Modi@20: Dreams Meet Delivery’ is written by intellectuals and eminent citizens including Sudha Murty, Sadhguru, Nandan Nilekani, Amish Tripathi, among others. “This book, a compilation of chapters authored by eminent intellectuals and domain experts, attempts a definitive and expansive exploration into the fundamental transformation of Gujarat and India over the last twenty years due to Modi’s unique model of governance,” reads the book’s blurb.