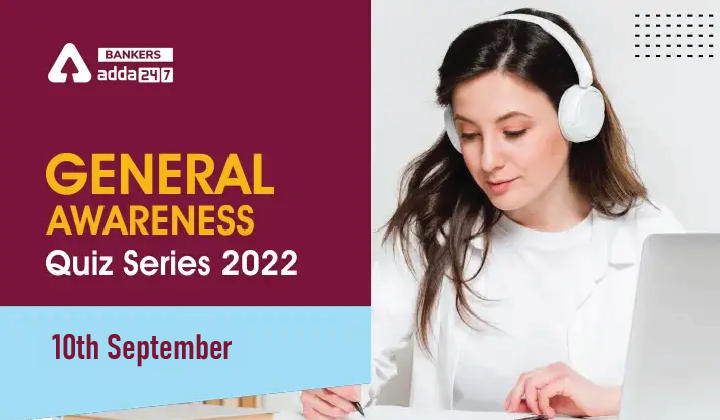 General Awareness Quiz Series 2022: 10th September: Hello Students, General Awareness is an essential part of all government exams. It’s better to prepare this section daily and revise the same using the factsheet provided. Bankersadda team has brought you up a new series in which we will come up with 10 questions and answers, other options of the question have related news to them. So don’t miss reading the solutions.

Q2. India conducted a Cyber Security Exercise part of the International Counter Ransom ware Initiative, in collaboration with which country?

Q6. Which country recently announced a new military aid of $2 billion for Ukraine and other European countries threatened by Russia?

Q7. Who has won the 31st Vyas Samman for his / her play Mahabali?

Q8. With which Financial institution WAARE the largest solar panel producer in India, has signed an agreement?

Q9.Where National Maritime Heritage Complex is going to be built?

India’s National Security Council Secretariat (NSCS) and the UK Government in collaboration with BAE Systems successfully conducted the Cyber Security Exercise for 26 Countries.
The exercise has been conducted as part of the International Counter Ransom ware Initiative- Resilience Working Group, which is being led by India under the leadership of National Cyber Security Coordinator (NCSC).

The government has approved an Electronics Manufacturing Cluster (EMC) in Pune at a cost of Rs 500 crore.
The proposal, approved by the Ministry of Electronics and Information Technology, is expected to attract investments of up to Rs 2,000 crore. The cluster will be set up over an area of 297 acres.

Rajasthan is set to launch the country’s first employment guarantee scheme for the urban poor named Indira Gandhi Shehari Rojgar Guarantee Yojana.
It will start on September 9th with a budget of Rs 800 crore. The scheme aims to provide 100 days of guaranteed employment to the urban poor, especially those who lost their jobs during the Covid-19 pandemic

U.S. Secretary of State Antony Blinken made an unscheduled visit to Kyiv, as the Biden administration announced major new military aid worth more than $2 billion for Ukraine and other European countries threatened by Russia.

The 31st Vyas Samman was conferred on to well-known Hindi writer Dr Asghar Wajahat at a function in New Delhi. He has been chosen for the prestigious award for his play Mahabali

The public enterprise’s selection board (PESB) has selected Ajit Kumar Saxena for the post of Chairman & Managing Director of “A” Miniratna Category-I Company, MOIL Limited.