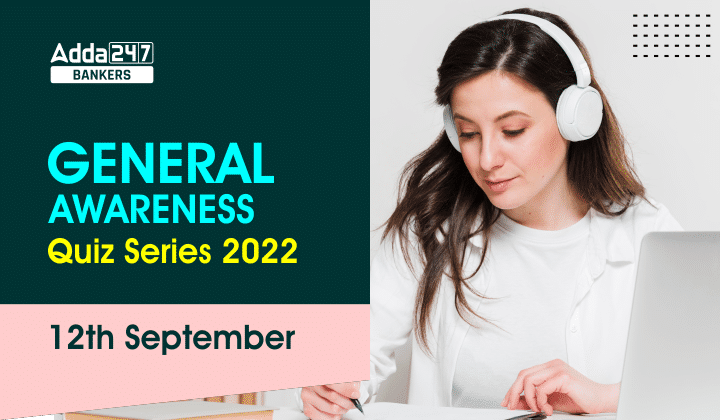 General Awareness Quiz Series 2022: 11th-12th September: Hello Students, General Awareness is an essential part of all government exams. It’s better to prepare this section daily and revise the same using the factsheet provided. Bankersadda team has brought you up a new series in which we will come up with 10 questions and answers, other options of the question have related news to them. So don’t miss reading the solutions.

Q1. When United Nations Day for South-South Cooperation is observed?

Q2. Which state government launched a scheme to provide 100 days of employment to needy families in urban areas on the lines of the rural employment guarantee scheme MGNREGA?

Q3. Which bank has launched Bank on Wheel van service?

Q4. According to Fortune India’s list of ‘India’s Richest’ for 2022,Gautam Adani became the richest man, who came on second rank?

Q5. Who has been appointed as the UN Human Rights Chief?

Q9. Community Harnessing and Harvesting Rainwater Artificially from Terrace to Aquifer (CHHATA) is launched by which state?

Q10. Who will be succeeding Queen Elizabeth II to the British Throne?

(a) King Charles I

The United Nations Day for South-South Cooperation is observed annually on September 12 to highlight the importance of cooperation among people and countries in the global South.

The National Mission for Clean Ganga organized Himalayan Diwas on September 09, in association with Naula Foundation.

Rajasthan government launched an ambitious scheme to provide 100 days of employment to needy families in urban areas on the lines of the rural employment guarantee scheme MGNREGA.

Chief Minister of Chhattisgarh, Bhupesh Baghel inaugurated the 32nd and 33rd districts of the State. Manendragarh-Chirmiri-Bharatpur and Sakti are new districts.

HDFC Bank has unveiled its state-of-the-art ‘Bank on Wheel’ van in Gujarat. The Bank in Wheel van service will take banking services to unbanked villages.

Axis Bank-PayNearby collaborate: A top executive of Axis Bank stated that partnerships like the one with branchless banking network PayNearby will help the private lender achieve its goals

According to Fortune India’s list of ‘India’s Richest’ for 2022, the wealth of 142 billionaires based in India is collectively worth USD 832 billion (Rs 66.36 trillion)