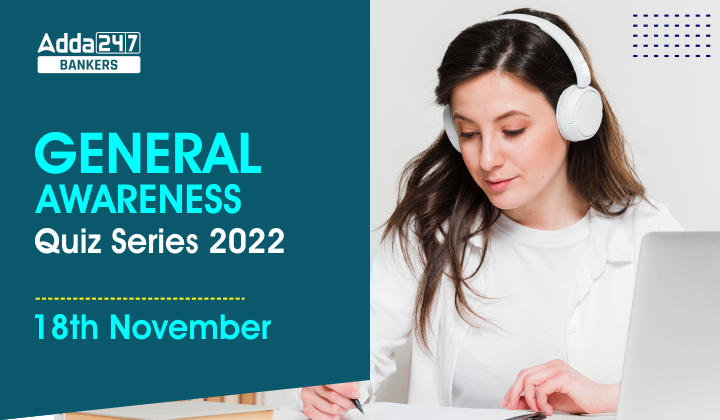 General Awareness Quiz Series 2022: 18th November: Hello Students, General Awareness is an essential part of all government exams. It’s better to prepare this section daily and revise the same using the factsheet provided. Bankersadda team has brought you up a new series in which we will come up with 10 questions and answers, other options of the question have related news to them. So don’t miss reading the solutions.

Q1. Chief Election Commissioner of India has been invited as International observer for which country’s forthcoming election?

Q2. India has emerged as the second-largest producer of crude steel by replacing by which country?

Q3. Which airlines has been fined by the US Department of Transportation (DOT) for delaying refunds?

Q4. India participated in the fourth Meeting of the Moscow Format along with Russia, China, Pakistan, Iran, Kazakhstan, Kyrgyzstan, Tajikistan, Turkmenistan and Uzbekistan. Moscow Format is for which of the objectives?

(a) Consultation on Security of Asia

(b) Consultation on Afghanistan

Q5. Which of the following banks has not been roped by the Reserve bank of Indiato work on the Retail Pilot Project of the central bank digital currency (CBDC)?

Q7. The National Commission for Women (NCW) launched the fourth phase of the Digital Shakti Campaign. It was started in which year?

Q8. Which of the following weeks is not celebrated in the month of November 2022?

(b)  International Week of Science and Peace

Q9. What is the age applicable for opening the National Pension System?

Q10. Who has been appointed as the chairman of the National pension System Trust?

India has emerged as the second-largest producer of crude steel by replacing Japan. The biggest steel producing country is currently China, which accounted for 57% of world steel production.

The US Department of Transportation (DOT) has fined Air India $1.4 million (around Rs 11.3 crore) for delaying refunds worth $121.5 million (around Rs 985 crore) to passengers whose flights were cancelled during the Covid-19 pandemic.

India participated in the fourth Meeting of the Moscow Format Consultations on Afghanistan, which was held in Moscow on November 16. Special envoys and senior officials from Russia, China, Pakistan, Iran, Kazakhstan, Kyrgyzstan, Tajikistan, Turkmenistan and Uzbekistan also participated in the meeting.

State bank Of India(SBI), ICICI Bank, IDFC First Bank, HDFC Bank and Yes Bank are among a shortlist of at least five lenders that the Reserve Bank of India (RBI) has roped in to work on the retail pilot project of the central bank digital currency (CBDC).

the Orion spacecraft was propelled by the Interim Cryogenic Propulsion Stage (ICPS). NASA also deployed the four solar arrays of the Orion spacecraft. After completing “translunar injection”, Orion separated itself from the ICPS and is now on its way to lunar orbit.

The National Commission for Women (NCW) launched the fourth phase of the Digital Shakti Campaign, a pan-India project on digitally empowering and skilling women and girls in cyberspace.

World Antimicrobial Awareness Week (WAAW) runs from 18 to 24 November every year. It’s an international initiative to increase awareness of the growing problem of resistance to antibiotics and other antimicrobial medicines.

In India, National Newborn Week is celebrated every year from 15 to 21 November.

November 9 to November 14 is observed as the International Week of Science and Peace every year around the globe.

Central Vigilance Commission observes Vigilance Awareness Week during the week in which 31st of October, the birthday of the late Sardar Vallabhbhai Patel falls. This year,

Vigilance Awareness Week is being observed from 31st October to 6th November 2022 with the following theme: “Corruption-free India for a developed Nation”.

Disarmament Week is celebrated from October 24 to 30 each year. One of the key goals of the United Nations is to achieve world peace.

​National Pension System (NPS) is a voluntary retirement savings scheme laid out to allow the subscribers to make defined contribution towards planned savings thereby securing the future in the form of Pension. It is an attempt towards a sustainable solution to the problem of providing adequate retirement income to every citizen of India.

The Central Government had introduced the National Pension System (NPS) with effect from January 1, 2004 (except for armed forces).