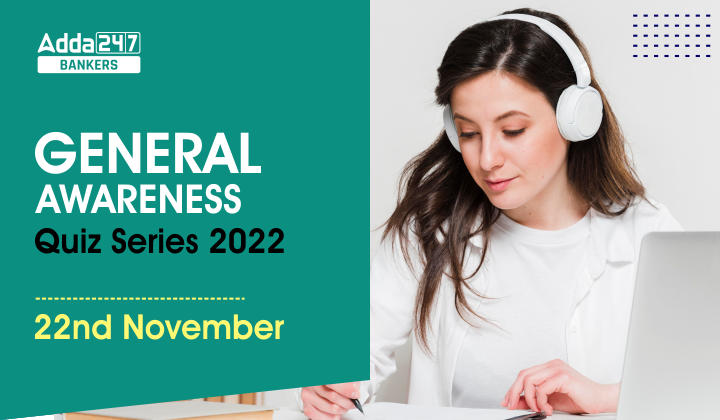 General Awareness Quiz Series 2022: 22nd November: Hello Students, General Awareness is an essential part of all government exams. It’s better to prepare this section daily and revise the same using the factsheet provided. Bankersadda team has brought you up a new series in which we will come up with 10 questions and answers, other options of the question have related news to them. So don’t miss reading the solutions.

Q2. Who has been honored with the Indian Film Personality of the Year 2022 award?

Q4. What is the rank of India as per the Network Readiness Index 2022 (NRI 2022) report prepared by a US-based Portulans Institute?

Q5. Who among the following is not in the election commission?

Q6. Who has written the book titled ‘The World: A Family History’?

Q7. Which of the recently passed obituaries doesn’t belong to film industry?

Q8. What amount of money will be awarded under Swachh Vidyalaya Puraskar ?

Q9. India will host 2023 SCO summit with theme “ For a SECURE SCO”. The concept of SECURE was floated in which year by Prime Minister Modi?

Q10. Which state government ha sdecided to double the pension of freedom fighters from 10,000 to 20,000 per month?

The Department of Archives, Archaeology and Museums is celebrating World Heritage week commencing from November 19 to November 25, 2022.

At the opening ceremony of the 53rd International Film Festival of India (IFFI), Telugu superstar Chiranjeevi was honoured with the Indian Film Personality of the Year 2022 award.

India has moved up by six slots to improve its position and rank 61st as per the Network Readiness Index 2022 (NRI 2022) report prepared by a US-based Portulans Institute, an independent non-profit research and educational institute

A new book titled “Winning the Inner Battle Bringing the best version of you to cricket” is authored by Shane Watson.

Daljeet Kaur, a veteran actor well-known for her lead roles in several superhit Punjabi movies, has passed away

Veteran actor Ghattamaneni Krishna, famous as Krishna Garu and known in the Telugu film industry as ‘superstar, passes away.

Kevin Conroy, an actor and voice actor best known for playing Batman in several animated movies and series, has passed away at the age of 66.

The former India basketball captain and Arjuna awardee, Gulam Abbas Moontasir, passed away in Mumbai. He was born in Mumbai in 1942.

Six sub-category wise awards have also been introduced for the first time, with award money of Rs 20,000 per school

The schools will be assessed through an online portal and mobile app in these sub-categories:-

India has launched the official website of the Shanghai Cooperation Organisation (SCO) as it will host the next SCO summit as a chairman of organisation in 2023.

The theme of the event is “For a SECURE SCO”. Prime Minister Narendra Modi had floated the concept of SECURE at the Shanghai Cooperation Organisation (SCO) summit in China in 2018. Explaining the SECURE concept, the Prime Minister said ‘S’ for security for citizens, ‘E’ for economic development, ‘C’ for connectivity in the region, ‘U’ for unity, ‘R’ for respect of sovereignty and integrity, and ‘E for environment protection.

The Maharashtra Government has decided to double the pension of freedom fighters from ten thousand to twenty thousand rupees per month. Accordingly, freedom fighters associated with India’s freedom struggle, Marathwada Mukti Sangram and Goa Liberation Movement will benefit from this decision.