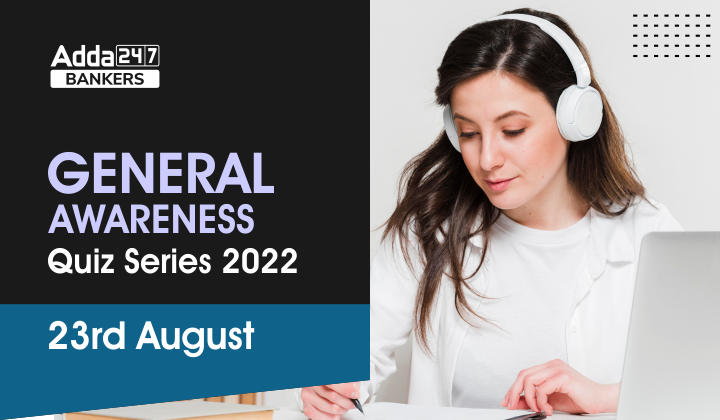 General Awareness Quiz Series 2022: 23rd August: Hello Students, General Awareness is an essential part of all government exams. It’s better to prepare this section daily and revise the same using the factsheet provided. Bankersadda team has brought you up a new series in which we will come up with 10 questions and answers, other options of the question have related news to them. So don’t miss reading the solutions.

Q1. Match the following GI Tags with their states:

Q2. Which of the following is not part of UNESCO’s intangible cultural heritage list?

Q3.  Asian Development Bank and the Indian Government today signed a loan agreement to provide safe drinking water and improve water supply and sanitation services in Himachal Pradesh for how many million dollars?

Q5. At what State / UT ONGC is getting ready to pump geothermal energy.?

(a) Jammu and Kashmir

Q6. What is the name of the latest freight train whose test run was conducted by  South East Central Railway (SECR) zone of the Indian Railways in August?

(a) Ministry of Health and Family welfare

(b) Ministry of Science and Technology

(c) Ministry of chemical and fertilizers

Q8.What is the name of the scheme aimed at generic promotion of silk and building brand equity of Indian Silk at home and abroad?

(a)  ICAR-Central Institute of Freshwater Aquaculture

Q10. Which  book Hebrew Translation was released by the Israeli President Isaac Herzog on the occasion of the 75th anniversary of India’s Independence?

(a) Indians at Herod’s Gate: A Jerusalem Tale

(b) Men of Steel- Military Leadership for India

Manisha Kalyan became the first Indian footballer to play at the UEFA Women’s Champions League when she made her debut for Apollon Ladies FC.

Indian boxer Nitu Ghangas has clinched a gold medal after defeating England’s Demie-Jade Resztan in the final of the women’s 48 kg category.

Anshu Malik won the silver medal in the Women’s Freestyle 57kg category in the Commonwealth Games 2022.

At 14,000 feet in Ladakh, ONGC is getting ready to pump geothermal energy. State-run explorer ONGC has set out on a mission to harness the steam streaming from the earth’s core at Puga.

Ministry of Science and Technology

Silk Mark by Silk Mark Organization of India. The Minister said that Silk Mark is aimed at generic promotion of silk and building brand equity of Indian Silk at home and abroad.  It is also protecting the interests of not only  the silk consumers but all stake holders of silk value chain including farmers, reelers, twisters manufacturers and traders of pure silk, She added.

Shri Parshottam Rupala, Union Minister for Fisheries, Animal Husbandry and Dairying, yesterday launched the Online Market Place feature “Aqua Bazar” in the “MatsyaSetu” mobile app during the 9th general body meeting of the National Fisheries Development Board. The app was developed by the ICAR-Central Institute of Freshwater Aquaculture (ICAR-CIFA), Bhubaneswar, with the funding support of the National Fisheries Development Board (NFDB), Hyderabad through the Pradhan Mantri Matsya Sampada Yojana (PMMSY).

Israeli President Isaac Herzog unveiled the Hebrew Translation of the book, “Indians at Herod’s Gate: A Jerusalem Tale” written by the former Ambassador of India, Navtej Sarna on the celebration of the 75th anniversary of India’s Independence