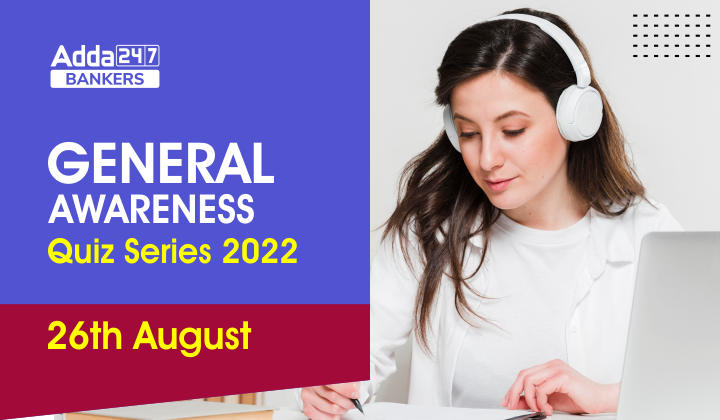 General Awareness Quiz Series 2022: 26th August: Hello Students, General Awareness is an essential part of all government exams. It’s better to prepare this section daily and revise the same using the factsheet provided. Bankersadda team has brought you up a new series in which we will come up with 10 questions and answers, other options of the question have related news to them. So don’t miss reading the solutions.

Q1. Which IIT has created  Xylitol from sugarcane bagasse, the byproduct of crushing sugar cane?

Q2. What is the name of youngest person to fly solo around the world?

Q3. Veer Narmad  is a great writer of which language?

Q5. In order to build 1,000 green energy businesses across the nation, the Small Industries Development Bank of India (SIDBI) has made an MoU with which of the following company?

Which of the following statements is/are incorrect?

Q7. A first-of-its-kind, Composite Indoor Shooting Range (CISR) was inaugurated by Vice Admiral Biswajit Dasgupta at which of the following Indian Naval ship?

Q8. Internaut Day is being celebrated around the world on August 23. Who is an internaut?

Q10. Match the following defence equipments with their country:

Researchers at IIT Guwahati have created a fermentation process that uses ultrasound to safely generate Xylitol from sugarcane bagasse, the byproduct of crushing sugar cane

Researchers in Hyderabad have successfully 3D-printed an artificial cornea (3D-printed Human Cornea) and placed it in a rabbit eye for the first time ever in India. A 3D-printed Human cornea made from human donor corneal tissue has been created by researchers from the L V Prasad Eye Institute (LVPEI), Indian Institute of Technology-Hyderabad (IIT-H), and the Centre for Cellular and Molecular Biology (CCMB).

A Memorandum of Understanding (MoU) between the National Payments Corporation of India (NPCI) and the Indian Institute of Technology (IIT), Kanpur

Nilekani Centre at AI4Bharat was established by the Indian Institute of Technology Madras to advance the state of Indian language technology and make a positive social impact.

A 17-year-old pilot, Mack Rutherford became the youngest person to fly solo around the world in a small aircraft after he landed in Bulgaria, where his journey kicked off five months ago. Mack Rutherford, a Belgian-British dual national, landed on an airstrip west of Bulgaria’s capital, Sofia, to complete his task and claim two Guinness World Records.

Indian philanthropist Ashish Dhawan has been named to the board of trustees of the Bill & Melinda Gates Foundation.

World Gujarati Language Day 2022 is celebrated every year on 24 August. This day is celebrated to commemorate the birth anniversary of the great writer of Gujarat ‘Veer Narmad’. ‘Gujarati Diwas’ is celebrated because the poet Narmad was considered to be the creator of the Gujarati language. He has made Gujarati literature international.

Other days in news:

International Dog Day is celebrated annually on August 26 to promote the adoption of dogs instead of buying them from pet shops.

In order to build 1,000 green energy businesses across the nation, the Small Industries Development Bank of India (SIDBI) and TP Renewable Microgrid Ltd (TPRMG), a fully owned subsidiary of Tata Power, have teamed up to launch green energy businesses programme. The project will promote sustainable business models across the country, resulting in the empowerment of rural entrepreneurs.

Godrej Agrovet, a diversified agribusiness conglomerate, announced that it has signed an MoU with the governments of Assam, Manipur, and Tripura to advance and promote oil palm growth

According to the government of India, transgenders will be brought under the ambit of Ayushman Bharat Pradhan Mantri Jan Arogya Yojana (AB PM-JAY). The National Health Authority (NHA) under Ministry of Health and Family Welfare and Department of Social Justice and Empowerment has signed a Memorandum of Understanding (MoU) to provide inclusive and composite health package for transgenders under Ayushman Bharat-PMJAY.

Internaut Day is being celebrated around the world to mark the invention of the World Wide Web. An “internaut” is a person who possesses a thorough knowledge of how to use the Internet and its history. August 23 marks the day when the World Wide Web was opened to the public back in the year 1991 for the first time by WWW inventor Tim Berners Lee as he allowed its access, CERN announced that the internet would be free to everyone and there would be no fee for its use.

Former German chancellor Angela Merkel has been awarded the Unesco Peace Prize 2022  for “her efforts to welcome refugees”.

The Liberty Medal 2022 will be awarded this fall to Ukrainian President Volodymyr Zelenskyy.

Bangladesh-born Fahmida Azim working for the Insider online magazine of the US has been selected for the Pulitzer Prize 2022.

In the coming week, India will commission its first Indigenous aircraft carrier. US aviation major Boeing has made a strong pitch for the Indian Navy to choose the F/A 18 Super Hornet fighter jet, claiming that it would bring a profit of $3.6 billion in domestic manufacturing. Boeing has joined its offers with the Government scheme Aatmanirbhaar Bharat, before the commissioning of the indigenous aircraft carrier Vikrant which will operate the new fighters. Vikrant is the largest warship built by India, and India plans to buy 26 carrier-based fighters for Vikrant. This deal will be done through a Government-to-Government deal to meet the needs of the Indian Navy, with the US firm competing with French aircraft maker Dassault Aviation has pitched its Rafale-M jets.