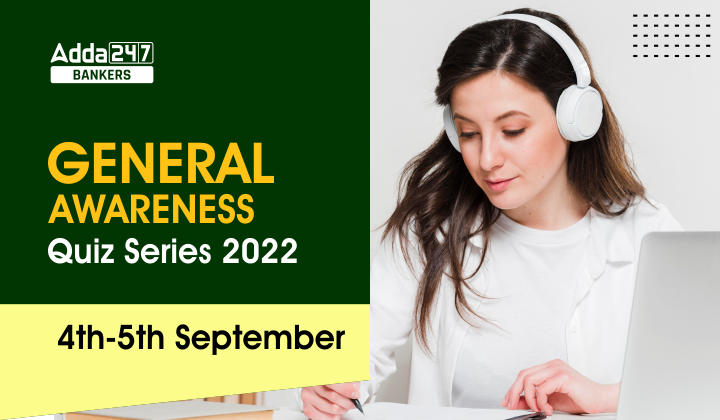 General Awareness Quiz Series 2022: 4th-5th September: Hello Students, General Awareness is an essential part of all government exams. It’s better to prepare this section daily and revise the same using the factsheet provided. Bankersadda team has brought you up a new series in which we will come up with 10 questions and answers, other options of the question have related news to them. So don’t miss reading the solutions.

Q1. Who has been appointed as the CEO of Sansad TV?

Q3. Which movie will be turned into comic book series?

Q4. Who has been appointed as the CEO of Starbucks?

Q5. Krushak Assistance for Livelihood and Income Augmentation is scheme of which state?

Q8. Whait is the name of the mascot and anthem for the 36th National Games which going to held at Gujarat?

Q9. How much percentage increase is seen in India’s Merchandise export in April-August -2022-23?

Q10. Hardeep Singh Puri will lead an official and business delegation to Milan, Italy from today to attend the Gastech Milan-2022. Gastech Milan is related to what?

Sarvepalli Radhakrishnan’s birthday, September 5, is commemorated each year in India with Teachers’ Day 2022.

“Bhool Bhulaiyaa 2,” starring Kartik Aaryan, will be turned into a comic book series.

State-owned hydro power giant NHPC Limited announced that Yamuna Kumar Chaubey has been given the charge of Chairman and Managing Director (CMD) for 3 months beginning September 1, 2022.

Central Government has granted permission to the Uttar Pradesh (UP) government’s proposal of releasing family IDs to its residents and application for Aadhaar authentication for their details through the ministry of electronics and information technology (MEIT).

World Bank Applauds India’s Effective Response to the COVID-19: The World Bank acknowledged the Indian government’s decision to have centralised procurement, support for long-term market development and production of Emergency Medical Equipment (EME). Early export restrictions worked in its favour during the public health emergency in the country in a paper titled “India Covid-19 Procurement: Challenges, Innovations, and Lessons.”

Union Home Minister Amit Shah launched the mascot and the anthem for the 36th National Games at Trans Stadia in Ahmedabad on Sunday evening. The mascot is named as Savaj which means cub in Gujarati. The anthem is based on the theme of Ek Bharat Shreshtha Bharat

Petroleum and Natural Gas Minister Hardeep Singh Puri will lead an official and business delegation to Milan, Italy from today to attend the Gastech Milan-2022. Gastech, the World’s largest gathering focussed on LNG as an abated bridge fuel will bring together leading Ministers and CEOs to discuss the evolving energy landscape, assess post-pandemic economic recovery and navigate a route to a just energy transition.