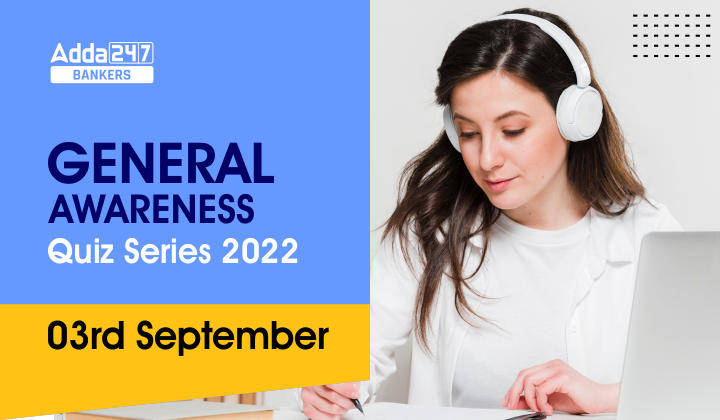 General Awareness Quiz Series 2022: 3rd September: Hello Students, General Awareness is an essential part of all government exams. It’s better to prepare this section daily and revise the same using the factsheet provided. Bankersadda team has brought you up a new series in which we will come up with 10 questions and answers, other options of the question have related news to them. So don’t miss reading the solutions.

Q1. Which bank has launched a cashback credit card?

Q3. Who has been appointed as the director general of the news services division of All India Radio?

Q4. International Monetary Fund have agreed to give conditional loan to Srilanka, It is of how many dollars?

Q5.Ministry of Women and Child Development is celebrating the 5th Rashtriya Poshan Maah 2022 across the nation from 1st September till 30th September. What is the theme of the week?

Q6. Which of the following is not a cricket who has recently retired from international cricket?

Q9. System for Pensions Administration – RakSHa or SPARSH has disbursed more than Rs 3,090 Crore. It is the initiative of which ministry?

(a) Ministry of Home Affairs

(b) Ministry of Personnel Training

Q10. Which of the following institute celebrated its 25th anniversary?

(a) Central Bureau of Investigation

Providing impetus to Digital India initiative, the System for Pensions Administration – RakSHa or SPARSH has disbursed more than Rs 3,090 Crore to Defense Pensioners digitally in the month of August, 2022. In another milestone, 5,62,946 Defence Pensioners migrated successfully onto the digital   platform of SPARSH in August 2022. The total number of pensioners onboarded to SPARSH has crossed over the one million mark with 11 lakh beneficiaries, which is nearly 33% of the total defence pensioners in India.

National Pharmaceutical Pricing Authority (NPPA) was constituted vide Government of India Resolution dated 29th August, 1997 as an attached office of the Department of Pharmaceuticals (DoP), Ministry of Chemicals & Fertilizers as an independent Regulator for pricing of drugs and to ensure availability and accessibility of medicines at affordable prices.