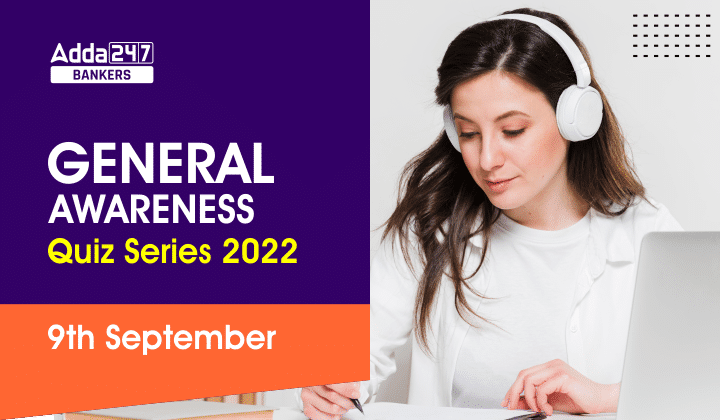 General Awareness Quiz Series 2022: 8th September: Hello Students, General Awareness is an essential part of all government exams. It’s better to prepare this section daily and revise the same using the factsheet provided. Bankersadda team has brought you up a new series in which we will come up with 10 questions and answers, other options of the question have related news to them. So don’t miss reading the solutions.

Which of the following statements is/ are correct?

Q2. India Ranked 132nd in the Human Development Index (HDI). How many countries are ranked in this index?

Q3. Which bank has launched a Rainbow saving account?

Q4. An experiment to demonstrate its ability to consistently carry out the work of a tiny tree on the red and dusty surface of Mars is carried out by?

Q5. Which city’s Jail got 5star rating from the Food Safety Standards Authority of India (FSSAI)?

Q6. Queen Elizabeth II, the UK’s longest-serving monarch, has passed away after reigning for How many years?

Q7. What is the deadline year to eliminate TB from India?

Q9. Which of the following food products is banned for foreign export in September?

Q10. By which year India has to reduce road accidents and deaths to 50%?

The HDI measures the average achievement of a country in three basic dimensions of human development — a long and healthy life, education and a decent standard of living. It is calculated using four indicators — life expectancy at birth, mean years of schooling, expected years of schooling, and the Gross National Income (GNI) per capita.

NASA’s Experiment MOXIE: An gadget the size of a lunchbox (MOXIE by NASA) is demonstrating its ability to consistently carry out the work of a tiny tree on the red and dusty surface of Mars

The Fatehgarh Central jail in Uttar Pradesh’s Farrukhabad district has earned a five-star rating from the Food Safety Standards Authority of India (FSSAI).

Queen Elizabeth II, the UK’s longest-serving monarch, has passed away after reigning for 70 years. She was 96. She breathed her last yesterday at her Scottish estate Balmoral.

The Queen came to the throne in 1952 and witnessed enormous social change.

President Droupadi Murmu will virtually launch the Pradhan Mantri TB Mukt Bharat Abhiyaan today to reinvigorate the mission of TB elimination from the country by 2025. Prime Minister Narendra Modi had given the clarion call to end TB in the country five years ahead of the Sustainable Development Goals of 2030 at the Delhi End TB Summit in March 2018.

Centre has banned the export of broken rice with an aim to increase domestic availability. The Directorate General of Foreign Trade DGFT in a notification said, export policy of broken rice is revised from free to prohibited.

Union Minister for Road Transport and Highways Shri Nitin Gadkari called upon all the state transport ministers and officials to work together to reduce road accidents and deaths by 50% by 2024.