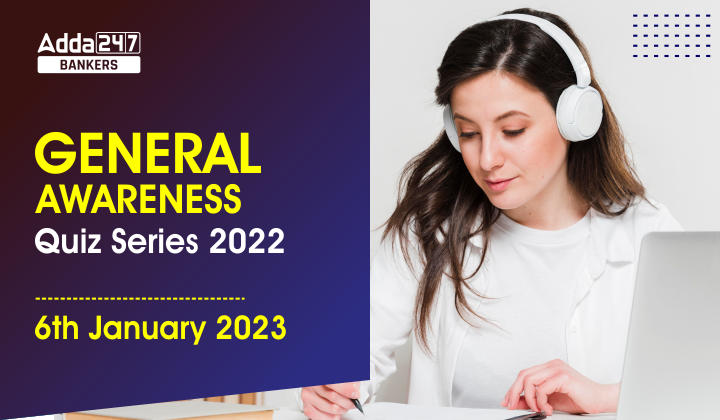 General Awareness Quiz Series 2023: 6th January: Hello Students, General Awareness is an essential part of all government exams. It’s better to prepare this section daily and revise the same using the factsheet provided. Bankersadda team has brought you up a new series in which we will come up with 10 questions and answers, other options of the question have related news to them. So don’t miss reading the solutions

Q1. World’ first Palm leaf manuscript Museum has been inaugurated in which country?

Q2. Which state has won the UN-Habitat’s World Habitat Awards 2023 for Jaga Mission?

Q3. Which of the following state launched the Mukhyamantri Awasiya Bhu Adhikar Yojana?

Q4. Which of the following statement about Asia Pacific Postal Union (APPU) is incorrect?

Q5. Where 18th National Jamboree of the Bharat Scouts and Guides was inaugurated by President of India?

Q7. Which of the state with their scheme is correctly matched:

Q8. Which of the following airports and their name is incorrect?

Q9. Imoinu day and Gaan Ngai Fesitival is celebrated in which state?

Q10. Who is authored the book Breaking Barriers: the Story of a Dalit Chief Secretary”?

Kerala Chief Minister(CM) Pinarayi Vijayan has inaugurated the Palm leaf Manuscript Museum with modern audio-visual technology at the renovated Central Archives, Fort area in Thiruvananthapuram, Kerala, India. The Museum, promoted as “World’s First Palm-Leaf Manuscript Museum” was set up by the Archives Department in association with the Kerala Museum of History and Heritage at a cost of Rs 3 crore..

Odisha won the UN-Habitat’s World Habitat Awards 2023 for Jaga Mission, a 5T initiative of the state. The awards recognise and highlight innovative, outstanding and revolutionary housing ideas, projects and programmes from across the world. The Jaga mission is the land titling and slum upgrading program that aims at empowering the lives of slum dwellers

Chief Minister Shivraj Singh Chouhan launched the Madhya Pradesh Residential Land Rights scheme (Mukhyamantri Awasiya Bhu Adhikar Yojana) to distribute free leases of residential land to selected beneficiaries. The scheme aims to provide free plots to the poor living in rural areas for building their houses. The land will be offered completely free of cost and along with the plot, the benefits of all other schemes will also be delivered

It was formed by International treaty through an Asian-Pacific Postal Convention signed in Yogyakarta on 27 March 1981.

The organisation has origins dating back to 1961

Writer Ambikasuthan Mangad has been selected for Odakuzhal Award 2022 for his collection of short stories titled Pranavayu. The award consists of Rs 30,000, citation, and plaque

Chief Minister of Odisha Naveen Patnaik directed the distribution of five kilograms of rice per month free of cost to beneficiaries of the State Food Security Scheme (SFSS) for the next one year.

Imoinu Day is celebrated in Manipur as a part of the Meitei Cultural ritual. The traditional festival of Imoinu Day is celebrated on the 12th day of the Meitei Lunar Month of Wakching. Every year on this day, people of the valley serve dishes in odd numbers as part of the Imoinu Eratpa ritual. They regard Imoinu Eratpa as a goddess of health, prosperity, abundance, and order of domesticity in Manipur

Gaan Ngai of the Zeliangrong Community celebrated in Manipur. The Gaan Ngai festival is one of the major festivals of Manipur which is celebrated every after harvesting

A book titled, ‘The Indian Navy@75 Reminiscing the Voyage’ by Commodore Ranjit B Rai (Retd) and defence journalist Aritra Banerjee