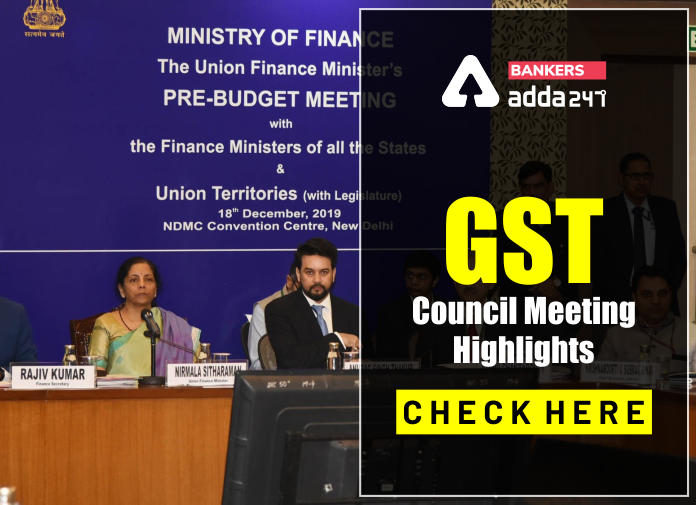 Today, on 12 June 2020, 40th GST council meeting take place for the first time after the nationwide lockdown which is chaired by Finance Minister Nirmala Sitharaman through video conferencing, in which, Anurag Thakur along with the finance ministers of the states & UTs, and senior government officers are also participating. The primary focus of this meeting is on revenue generation amid low tax collections.

Highlights Of The Council Meetings:

We will  update further announcements related to this meeting here:

In one of the major amendments in CGST rules, the Govt announced to fix ceiling for value of export supply for calculation purpose of refund on zero-rated supplies.

The Govt’s has decided to increase the import duty on bamboo from 10% to 25% stating that this move will open new window for employment.

Currently, India is second largest bamboo producer and also the  second largest importer of bamboo too. The hike in the bamboo import duty will curb heavy import from China and encourage local manufacture in Agarbatti and bamboo industries

The central board of Indirect tax and customs has put an end to much hustle created by the contrary rulings of Advance Ruling Authorities (‘ARA’) on the levy of GST on remuneration paid to Directors of a company by stating that Director’s remuneration shall be taxable only to the extent the remuneration is outside the terms of employment.

In a step to give relief to small taxpayers, FM Niramala Sitharama  has announced that there will be no late fee for GSTR 3B return, which has no liability. For the returns with liability, the maximum late fee has been capped to Rs 500. The intrest rate has been reduced to 9% from 18% for the month of February, March, and April.

GST or Goods & Services tax is an Indirect Tax which has replaced many Indirect Taxes in India. On 29th March 2017, Lok sabha passed the CGST, IGST, Compensation and UTGST bill. After a long struggle, the GST Bill was finally came into effect on 1st July 2017. Goods & Services Tax Law in India can be describe as a comprehensive, multi-stage, destination-based tax that is levied on every value addition. On 1 July 2020, GST will be completing three complete years.

In other words, Goods and Service Tax (GST) is an indirect tax which is levied on the supply of goods and services. This law came into force to replace many indirect tax laws that previously existed in India.

GST or Good & Services tax is one indirect tax for the entire country.

How GST Came Into Force

The journey of GST is long and it almost took it 17 years to came into force. France was the first country to implement GST. Given below is the simplified version of the steps taken to implement GST in India:

2000: A committee was set up by PM Vajpayee to draft GST Law

2004: A task force concludes that the implementation os GST is must to improve current tax structure.

2010: GST implementation was postponed and a project to computerise commercial taxes was launched.

2012: Standing committee begins discussion on GST but stalled it over clause 2798

2015: GST Bill passed in Lok Sabha but not passed in Rajya Sabha

2017: GST bill was implemented all across the nation.