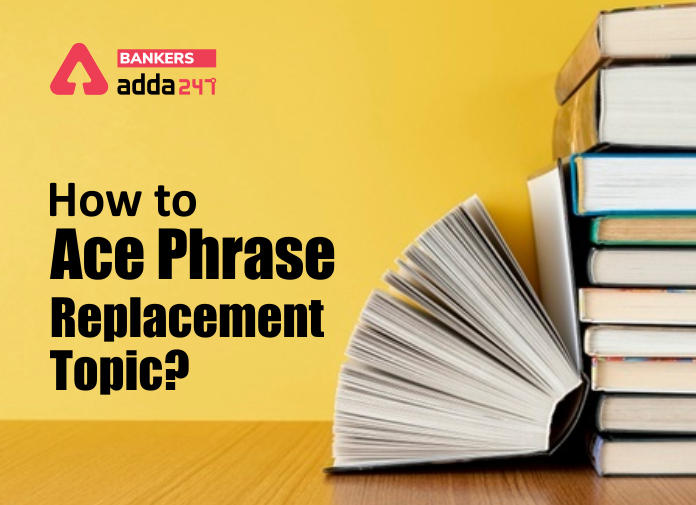 English Language is an important section for banking aspirant and you cannot afford to give it a cold-shoulder. In this article, we will be discussing one of the important topic that usually carries 3-5 marks in banking exams. Phrase replacement is one such topic which is usually asked to test your grammar and here we will be learn the tips which can help us to score better in this topic. Make sure you bookmark this page for future reference.

What is Phrase Replacement?

Phrase Replacement Based On Grammar

Grammar can sail you through this section so make sure that you work extra hard on this. Given below are some of the tips and tricks which can help you to ace this topic:

Let’s Understand this topic better with some examples:

The three names have reached the Ministry of Law and Justice, who has been processing the files, ministry sources

As you can see, it becomes quite easier to choose the correct option if you are well versed with  the rules  and basics of grammar. Now, look at the following example based on vocabulary.

Solution: (b); ‘diverse population’ will have ‘more than one conflicts’ hence, plural form i.e. ‘difficulties’ should be Hence, (b) is the correct option.

Phrase Replacement Based On Vocabulary

You need to have a very strong vocabulary to solve the questions based on them. Given below are some of the tricks which you can use to improve vocabulary:

Let’s understand them with an example:

To cover the gap between rainfall and water scarcity, govt. will have to invest in desilting water storage in canals and minor water

Solution: To cover something means ‘put something on top of or in front of (something) in order to protect or conceal it’. Hence, it does not go with the meaning of the sentence. Now,  ’to take down’ means ‘to lower without removing’ hence, (b) is also not the appropriate option. Again, ‘to make for’ means ‘ to move or head towards something’ whereas, ‘to make up for’ means ‘compensate for something lost, missed, or deficient.’ Hence, (c) and (d) are also not the correct option. ‘To bridge the gap’ means ‘to make the difference between two things smaller’. Hence, (a) is the most appropriate option. Such commonly used phrases are given in the vocabulary section of this book.

Being a women, she was barred from entering the temple.

(d) Having being women (e) No replacement required

Given below are some of the phrases which are usually asked in examination:

Example 1→ “The babysitter had a difficult time. The children acted up all evening.”

Example 2→ “I guess I’d better take my car to the garage. It’s been acting up lately.”

add up (1. No object): logically fit together.

Example 1→ “His theory is hard to believe, but his research adds up.”

Example 2→ “His theory seems, at first, to be plausible, but the facts in his research don’t add up.”

add up(2. Separable): find the total.

Example 1→ “What’s the total of those bills? Could you add them up and see?”

add up to(inseparable): to total.

ask out(separable): ask for a date.

Example 1→ “Nina has a new boy friend. James asked her out last night.”

Example 1→ “Timmy was going to call the police when I told him I’d wrecked his car, but he backed down when I said I’d pay for the damages.”

back up(1. no object): move backward; move in reverse.

Example 1→ “You missed the lines in the parking space. You’ll have to back up and try again.”

Example 2→ “The people waiting in line are too close to the door. We won’t be able to open it unless they back up.”

back up(2. separable): drive a vehicle backwards (in reverse).

Example 1→ “You’re too close! Back your car up so I can open the garage door.”

back up (3. separable): confirm a story, facts, or information.

back up(4. separable): make a “protection” copy to use if there are problems with the original.

Example 1→ “When my computer crashed, I lost many of my files. It’s a good thing I backed them up.”

beg off(no object): decline an invitation; ask to be excused from doing something.

Example 1→ “At first Lily said she would be at the party. Later she begged off.”

Example 1→ “We need lots of balloons for the party. Will you blow them up?”

Example 1→ “That old building really came down quickly!” “That’s because the construction company used dynamite to blow it up.”

Example 1→ “When I told Jerry that I’d had an accident with his car, he blew up.”

bone up on(inseparable): review/study thoroughly for a short time.

Example 1→ “If you’re going to travel to Peru, you’d better bone up on your Spanish.”

break down(1. separable): separate something into component parts.

Example 1→ “We spent a lot of money at the supermarket. When we broke the total cost down, we spent more on cleaning supplies than food.”

break down (2. no object): stop working/functioning. “Sharon will be late for work today. Her car broke down on the freeway.”

break in (1. Often no object; with an object, break into– inseparable): enter by using force (and breaking a lock, window, etc.)

Example 1→ “Jane’s apartment was burglarized last night. Someone broke in while Jane was at the movies.”

Example 2→ “Somebody broke into Jane’s apartment while she was at the movies.

break in (2. separable): wear something new until it’s / they’re comfortable.

Example 1→ “These are nice shoes, but they’re too stiff. I hope it doesn’t take too long to break them in.”

break in(3. separable): train; get someone / something accustomed to a new routine.

Example 1→ “I hope I can learn my new job quickly. The manager hasn’t scheduled much time for breaking me in.”

Example 1→ “What time did the party break up last night?”

break up(2. Usually no object; with an object, break up with [inseparable]): end a personal relationship.

Example 1→ “Tim and Julie aren’t going steady any more. They got really angry with each other and broke up.”

Example 2→ “Have you heard the news? Julie broke up with Tim!”

Example 3→ “I’m sorry to hear that their marriage broke up. I’m sure the divorce will be difficult for the children.”