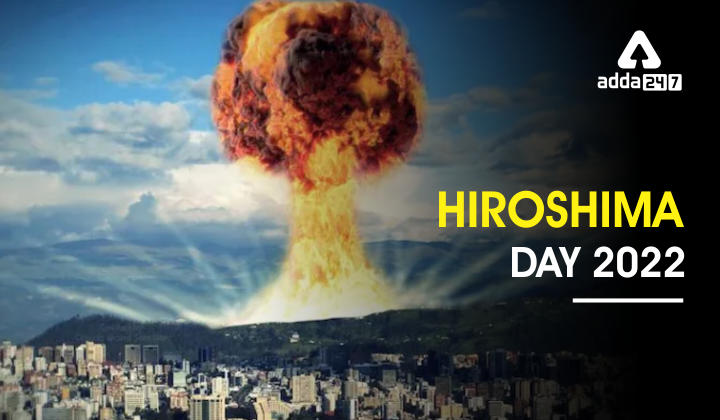 Hiroshima Day 2022: Hiroshima Day is observed every year on the 6th of August. This year we are celebrating the 77th anniversary of Hiroshima Day. In 1945 during the Second World War on this particular day, the United States dropped an atomic bomb on Hiroshima, a city located in Japan. The blast was so destructive that it demolished 90 percent of the city and at that particular moment, approximately 20,000 soldiers, more than 70,000 people lost their life. The effect of radiation remained for months and years and took the lives of many citizen and even affected the next generations of Japan. In history this was the first time that a nuclear bomb was used in the conflict. To know more about the History, Significance, and Key Facts related to Hiroshima Day go through the article below.

The conflict was between the Axis Coalition and the Allied Forces. Axis Coalition comprised Japan, Nazi Germany and the Kingdom of Italy. The United States, Britain, the Soviet Union, and China were included in the Allied Forces. To take hold on European and American colonies in Southeast Asia Japan carried out attacks on the United States and British Forces. In 1941 Japan attacked Pearl Harbor, Hawaii, and British-occupied Hong Kong. These attacks caused several damage to the forces of the United States and Britain.

In May 1945, Germany surrendered to the allied forces. The allied leaders now asked the Japanese armed forces to surrender unconditionally. The Japanese government did not accept the demand of Allied Forces. The United States realized that they can rescue millions of US members from Japan only through the use of Nuclear Bomb. Under the guidance of Nuclear Physicist Robert Oppenheimer the United States created two atom bombs and named the project as Manhattan Project. The first atom bomb was known as Little Boy and another was named Fat man. On 6th August, 1945 the American B-29 dropped Little Boy on Hiroshima and destroyed the entire city. Japan surrendered to the Allied Forces. Thus August 6 is commemorated as the Hiroshima Day.

Hiroshima Day is observed to highlight the effects that can be seen after a nuclear attack. The main significance behind commemorating Hiroshima Day is to promote peace politics and not go for war. People celebrate Hiroshima Day by visiting the Hiroshima Peace Memorial Park, Japan and pay their tribute to the ones who lost their lives during the nuclear war. Japan recovered from the attack and has been growing since then but Hiroshima Day can never get out of their memory.

The Key Facts related to Hiroshima Day is mentioned below:

Q.1 When do we celebrate Hiroshima Day?

Ans. Hiroshima Day is celebrated every year on 6th August.

Q.2 Why do we celebrate Hiroshima Day?

Ans. Hiroshima Day is celebrated to remember the nuclear attack on Hiroshima by the United States.