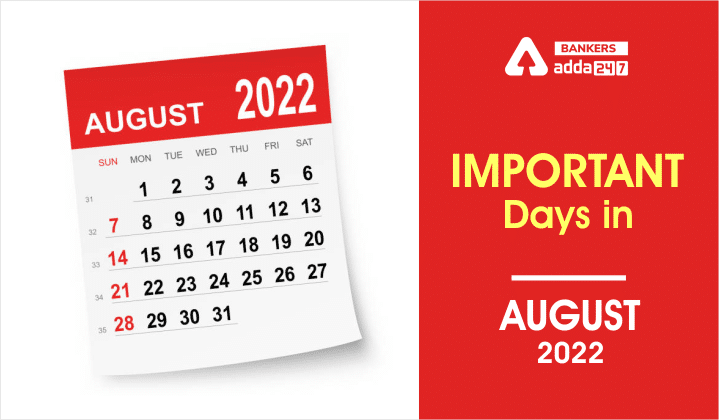 Important Days In August 2022: Each and every day of the year has its own significance and value at the national and international levels. Important national and international days is a topic that is observed in several competitive examinations such as banking, SSC, Railways, LIC, SBI, RRB., and other exams. Being a land of festivals, numerous culture, and population, India celebrates many days and dates. The festivals of the year start from the month of August and hence the month is considered as auspicious. This year in the month of August we are celebrating the 75th Independence Day of our Nation. In this article, we are going to discuss all the Important Days of August 2022  in detail.

There are many important days which are having historical significance in the month of August 2022 and National Handloom day is one among them. National Handloom Day is celebrated in remembrance of the Swadeshi Movement which was started on 7th August 1905 in the Calcutta Town hall to protest against the partition of Bengal by the British Government. All those candidates who are preparing for any kind of competitive exam must be aware of the Important days in August 2022 and the reason behind celebrating them.

Let’s have a look at the complete list of Important National and International Days of August 2022 in the given table.

Details About Important Days In August 2022

Every year Hiroshima Day is observed on the 6th of August on the anniversary of the atomic bombing of Hiroshima in 1945. The primary purpose of keeping this day is to promote peace and politics.

National Handloom Day is celebrated every year on the 7th of August. This day is observed annually to create awareness about the handloom industry amongst the public at large and its contribution to socio-economic development.

Nagasaki Day is observed annually on 9th August on the anniversary of the atomic bombing of Nagasaki (Japan)  in 1945. Nagasaki was the second city after the first bombing three days earlier of the city of Hiroshima.

Independence Day is celebrated annually on the 15th of August, which is celebrated religiously throughout the country every year, and holds tremendous ground in the list of national days since it reminds every Indian about the dawn of a new beginning, the new era.

Every year, Sadbhavna Diwas or Harmony Day is celebrated on the 20th of August. This day is observed with the objective to encourage national integration, peace, affection, and harmony among the Indian people and all religions.

women’s Equality Day, celebrated every year on the 26th of August, to commemorate the passage of women’s suffrage in the US and remind us of the hurdles overcome by the heroic women who faced violence and discrimination to propel the women’s movement.

National Sports Day is celebrated every year on 29th August. The Day is dedicated to commemorating the birth anniversary of Indian hockey legend, Major Dhyan Chand. Major Dhyan Chand was a legendary figure in Indian and world hockey.

Every year on 30th August, the country celebrates Small Industry Day. The day is dedicated to encouraging small businesses around the country.

Candidates can check all important days and dates month-wise in the given table.

Ans. Every year, world youth day is celebrated on the 12th of August 2022.

Ans. Candidates can check all important national and international days of August 2022 in the above article.