Direction (1-5): Study the following information carefully and answer the given questions:
Eight students are appearing in an examination in four different months- August to November in two different shifts- 8 AM and 5 PM. Only two persons give exam in between W and T, whose exam is in the month which have even number of days. P gives exam in the month having 31 days. S gives exam in evening shift but before W. Three persons give exam between U and R. W gives exam before T. V gives an exam in evening shift of the month which have odd number of days but after W. U gives the exam in the month having 30 days but not in November. Only two persons give exam between P and Q.
Q1. Who among the following appears for exam in October in evening shift?
(a) T
(b) Q
(c) S
(d) V
(e) None of these

Q6. If point T is in the midway of point V and point R, then in which direction point Q is with respect to point T?
(a) North
(b) South West
(c) North East
(d) North West
(e) None of these 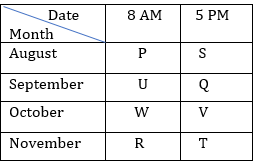 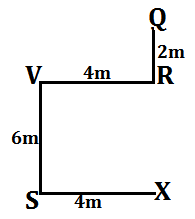