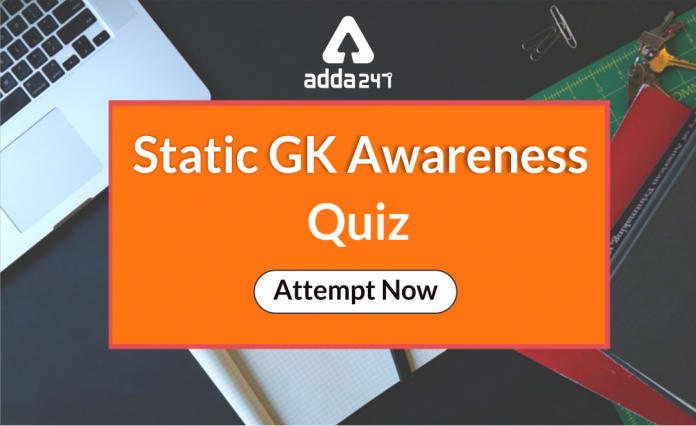 Sol. The Rajiv Gandhi Khel Ratna Award in Sports and Games is the highest sporting honour of the Republic of India. The winner of this award gets a reward of 7.5 lac rupees.

Q2. Pakistan Prime Minister Office has announced a 3-year extension of General Qamar Javed Bajwa’s tenure as Chief of Army Staff. Who is the present President of Pakistan?

Sol. Arif-ur-Rehman Alvi is a Pakistani politician and serving as the 13th and current President of Pakistan, in office since 9 September 2018.

Sol. Pallewatte Gamaralalage Maithripala Yapa Sirisena is a Sri Lankan politician, the seventh and current President of Sri Lanka, in office since 9 January 2015.

Q4. Karnataka government has amended the Karnataka Poisons (Possession and Sale) Rules 2015 and notified Nicotine as “Class A poison”. Who is the present Chief Minister of Karnataka?

Sol. Bookanakere Siddalingappa Yediyurappa is an Indian politician who is the Chief Minister of Karnataka.

Q5. India’s first Central Institute of Chemical Engineering & Technology will be set up in Gujarat. Which of the following National Park is situated in Gujarat?

Q6. Digital payments player Paytm announced the promotion of its Chief Financial Officer Madhur Deora as the company’s President. Who is the founder of Paytm?

Sol. Vijay Shekhar Sharma is an Indian billionaire businessman. He is the founder of mobile payments company Paytm.

Sol. Prime Minister is the chairman of CSIR. It is headquartered in New Delhi.

Sol. Sadbhavana Diwas is celebrated on 20 August every year to commemorate the birth anniversary of former Prime Minister Rajiv Gandhi.

Sol. Rajpura Thermal Power Plant, Rajpura. It is a Case-2 based most efficient and top of the MERIT order thermal power plant in Punjab.

Q11. Wipro announced a strategic partnership with the Indian Institute of Science (IISc) to conduct advanced applied research in autonomous systems, robotics and 5G. Who is the present MD and CEO of Wipro?

Sol. Abidali Neemuchwala is an Indian-American business executive. He is the chief executive officer and managing director of Wipro since February 2016.

Q12. Shri Mata Vaishno Devi University (SMVDU), Jammu and National Institute of Solar Energy (NISE) have signed a memorandum of understanding (MoU) to work jointly to achieve the objective of National Solar Mission. Where is the headquarters of the International Solar Alliance?

Sol. The headquarters of International Solar Alliance in Gurugram, Haryana.

Q13. Indian Para Swimmer Satendra Singh Lohia has become the first Asian swimmer to cross the Catalina Channel of America. What is the National Sports of USA?

Sol. Baseball is the national sport of the United States. The game is also widely regarded as the country’s favourite obsession.

Q14. Defence Research and Development Organisation (DRDO) handed over the design of Mobile Metallic Ramp (MMR) to the Indian Army. Who is the present Chairman of DRDO?

Q15. Amazon has opened its largest campus in the world in Hyderabad. The campus covers 1.8 million square feet and can accommodate 15,000 workers. Where is the headquarter of Amazon?

Sol.  The headquarter of Amazon in Seattle, Washington, United States.