Skip to content
IBPS RRB PO/Clerk Mains Quantitative Quiz
Do you follow a proper strategy or Study Plan for IBPS RRB Mains 2019? Are you aiming IBPS RRB 2019 this time? If yes, then this is the section which can help you to do wonders if practiced well. A good attempt with a mix of accuracy can help you fetch good marks. The reasoning is a game of wits and mind. It is all about logics that a question may have. Speed and accuracy are what that matters the most in this section. The only way to achieve an ambitious goal is by practicing only. So, attempt the quiz of Reasoning ability that inculcates the important questions from the important topics. Do not miss out to practice the Quantitative Aptitude Quiz that is being provided on Bankersadda. 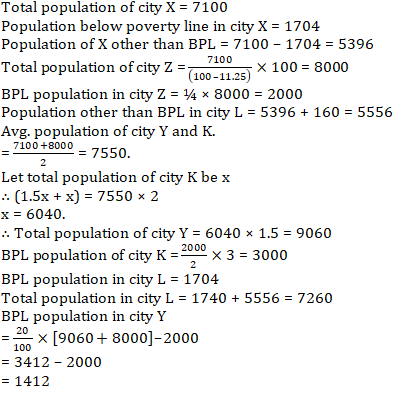 Directions (6-10): The following questions are accompanied by three statements (I), (II), and (III). You have to determine which statement(s) is/are sufficient /necessary to answer the questions

Q6. A group of six students in a class noticed that the sum of their ages is one less than square of a prime number. Then find the average age of the group?
I. Two elder students have average age of 70 years and one youngest student has an age of 40 years.
II. All students are between 50 years and 85years of age.
III. Difference of the age of youngest and eldest student is 35 yeras.
(a) Only I
(b) Only II
(c) Only I and III
(d) Cannot be answered even including all three statement
(e) None of these

Q7. What is the total surface area of a cylinder?
I. If ratio of base radius and height of the cylinder is 2 : 5.
II. Total circumference of top and bottom surface is 176 cm and volume is numerically 18,480 more than its curved surface area.
III. If radius of the cylinder is 21cm less than its height.
(a) Only II
(b) Only II or either I or III.
(c) Can’t be determined
(d) Only II or Only I & III
(e) None of these 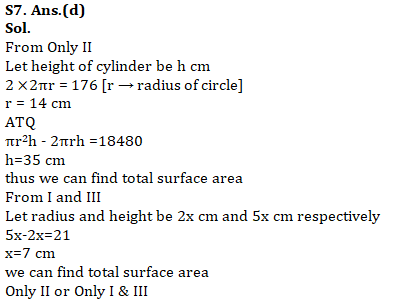 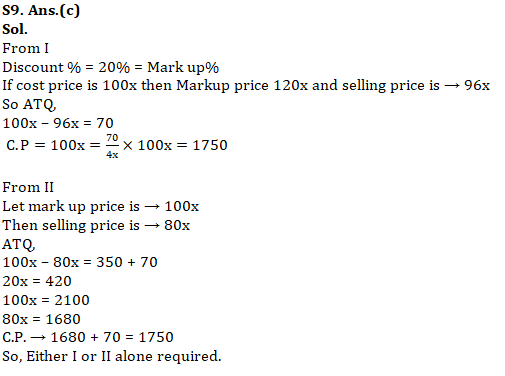 Direction (11-15)∶ What approximate value will come at the place of question (?) mark.