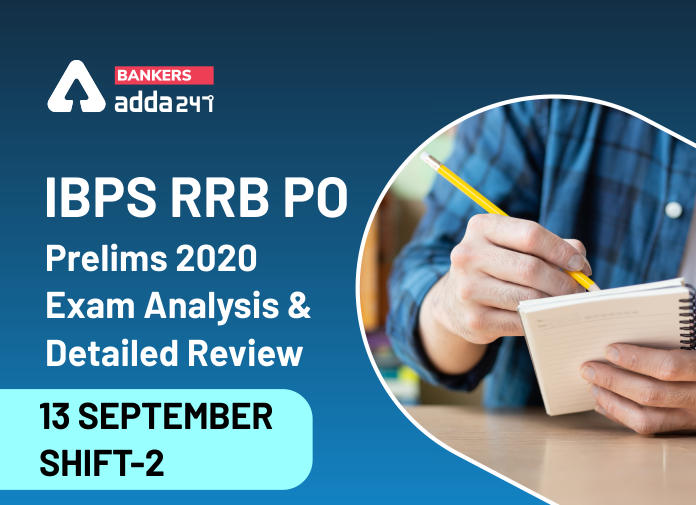 IBPS RRB Exam Analysis 2nd Shift for Today – The second shift for IBPS RRB PO Prelims Exam is over and the candidates who have their exam scheduled in other shifts or tomorrow are eager to know the detailed IBPS RRB PO Prelims Exam Analysis today and good attempts of this shift. Adda247 has collected the exam review directly from the aspirants who have attempted in the IBPS RRB PO Prelims Shift-2 Exam and according to them the overall level of today’s shift-2 examination was Easy to Moderate.There were 2 sections in this exam namely- Reasoning Ability and Quantitative Aptitude. This year, the exam appeared in English (default) and regional language (to be selected) on the same screen. The instructions provided to the candidate before examination were also available in regional languages as per the state.

As the overall difficulty level of the examination was easy to moderate, the students who have prepared for the exam well, were able to attempt maximum questions with accuracy. Not much changes were observed in the second shift when we compare it to the previous one. The following table contains the average number of attempts as per IBPS RRB Exam Analysis conducted by us directly from the students who have appeared for the shift-2 exam on 13th September.

The following are the details of the topic asked in each section along with number of questions and the difficulty level.

Students who attempted IBPS RRB PO Shift-2 exam on 13th September have reviewed that the reasoning ability section was quite easy to moderate. There was one question from Alphabet based and the word was “IMPARITY”. In 2nd Shift, there were no questions from Chinese Coding-Decoding, Inequality topics.

Puzzles and Seating Arrangement Questions were of following pattern;

The following table depicts the questions asked in the 2nd shift of the exam.

Team Bankersadda wishes you all the best for the exam in upcoming shifts!!!

Q. Were there any changes in the shift 2 of IBPS RRB PO Prelims Exam compared from the shift-1?

Ans. Not much changes were there. The difficulty level remains the same i.e. easy to moderate.

Q. Was there any questions from Inequality Section?

Ans. No in 2nd Shift of 13th September, there were no questions from Inequality topic

Q. What was the level of puzzle and seating arrangement questions in 2nd Shift, 13 September 2020?

Ans. The level of puzzle and seating arrangement was easy to moderate.

Q. How many types of Data Interpretation questions were there in the second shift of the exam?

Ans. There were 3 sets of DI in shift-2 : Caselet, Tabular and Bar Graph

Q. What are the good attempts for IBPS RRB PO Prelims Shift 2 held on 13 September 2020?

Ans. 53 to 58 are the average good attempts reported by the students who have appeared for the exam.