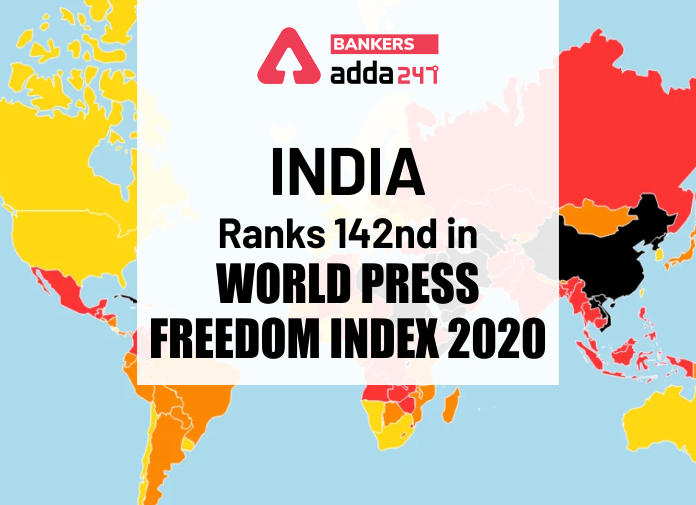 About The World Press Freedom Index:

The World Press Freedom Index is released annually by the Reporters Without Borders (RSF), an independent NGO based in Paris, France. The World Press Freedom Index is published annually by RSF since 2002 and evaluates the degree of freedom available to the media throughout the world. It analyses the degree of pluralism, media independence, the environment for the media and self-censorship, the legal framework, transparency, and the quality of infrastructure that encourages the production of news and information. It does not evaluate government policy.

It calculates two types of indicators i.e. global indicator and the regional indicators which depends on the scores registered by each country. The score of the country is being calculated from the responses to a questionnaire in 20 languages that is completed by experts from all over the world, supported by a qualitative analysis. These scores calculates the constraints and violations, and hence indicates the situation with the score i.e. the higher the score, the worse the situation.

About Reporters Without Borders:

Reporters Without Borders (RSF) is an independent NGO which is based in paris. The NGO has a consultative status with the United Nations, UNESCO, the Council of Europe and the International Organization of the Francophonie (OIF). The “Reporters Without Borders” was found by four journalists in the southern French city Montpellier in 1985 which has now become world’s one of the leading NGOs in the defence as well as promotion of freedom of information. It releases the World Press Freedom Index every year in which it evaluates the level of freedom available to the media in 180 countries.

Norway has topped the World Press Freedom Index 2020. Norway was placed on the top for the fourth year in a row. Apart from Norway at the top, Finland, Denmark, Sweden and Netherlands also finished as the top 5 rankers of the index. North Korea took the last position from Turkmenistan and hence finished 180th in the index.

India was ranked 142nd in the index while Pakistan and China were placed at 145th and 177th position respectively.

When it comes to regionwise results, Europe persists as the most favourable continent for media freedom, followed by America and Africa.

As we all know that the Covid-19 pandemic has amplified the various crises that threatens the right to freely reported, independent, diverse and reliable information, the 2020 World Press Freedom Index has indicated that the coming decade will be decisive for the future of journalism. The index has also stated some converging crises which will affect the future of journalism in the world. These crises are: a geopolitical crisis, a technological crisis, a crisis of trust, a democratic crisis and an economic crisis.