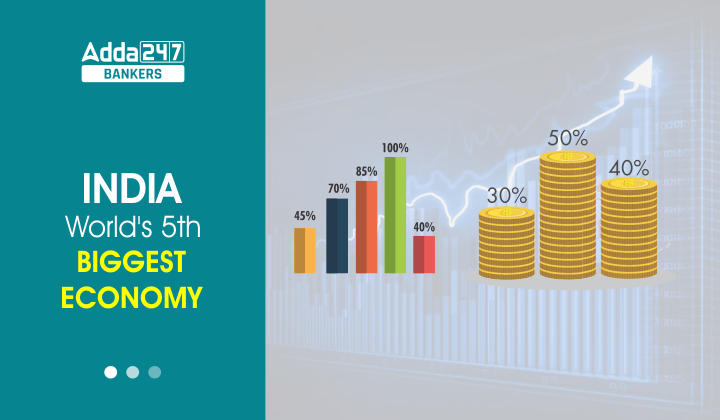 India surpasses the UK to become the world’s fifth biggest economy: Bloomberg has announced that India surpassed Britain to become the fifth largest economy of the world. On the Bloomberg Terminal, the calculations were done using the database of the International Monetary Fund(IMF) and historic exchange rates. According to the GDP figures from the IMF, the calculation is based on US dollars and India extended its lead in the first quarter. It is estimated that this year the Indian economy will grow more than 7 percent. The ranking of the United Kingdom has been shrunk to 6th position.

India has emerged as the World’s 5th Biggest Economy. The highest ranking countries of the world in nominal GDP, According to the International Monetary Fund are:

This year on annual basis the forecast of IMF is highlighting that India is overtaking the UK in dollar terms. India is putting the Asian powerhouse behind just the US, China, Japan and Germany. Ten years ago among the largest economies India ranked 11th while the United Kingdom was at 5th. In 2022-23 the government is expecting the economy to grow at 7-7.5 per cent. On the last day of the relevant quarter by using the adjustment basis and dollar exchange rate, the size of the Indian economy in “nominal” cash terms in the quarter through March was $854.7 billion and UK was $816 billion.

GDP is used for calculating the economic size of a country. The estimated total value of finished goods and services produced within the boundary of a country during a specified time period, usually a year is called Gross Domestic Product(GDP). The most common method used for measuring GDP is the expenditure method, which calculates GDP by adding up spending on new consumer goods, new investment spending, government spending, and the value of net exports (exports minus imports).